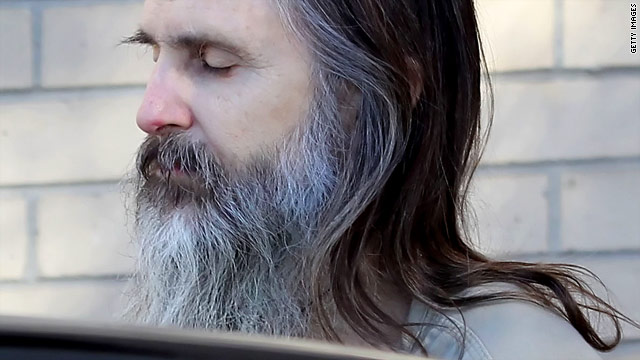 "A judge won’t put up with any kinds of shenanigans or behavior - intentional or unintentional - that might have the effect of swaying the jury one way or another. He wants the jurors focused on the evidence and not the other things," said Paul Lisnek, a trial consultant who has worked on the cases of O.J. Simpson, Phil Spector and Heidi Fleiss.

"But, the judge is also always thinking about getting overturned on appeal," he added. "An appellate court may say, 'Why didn’t you control your courtroom?' "

Mitchell’s disruptions began in pretrial hearings in 2004, when he’d sing and hum to himself –- an action he took toward the end of his police interrogation a year earlier. The behavior continued during his federal trial, which began in October in Salt Lake City.

Each day, he’d enter the courtroom and sing at the defense table. U.S. District Judge Dale Kimball advised him that he’d waive his right to attend his trial if he kept singing. The judge waited, the singing continued and Mitchell was led each day to a room equipped with audio and video feeds, where he could watch the trial.

He’d stop singing as soon as he entered the room, according to testimony.

It was a delicate balancing act for the judge to keep the jury focused while ensuring Mitchell’s right to a fair trial. Mitchell’s rights include the ability to confront witnesses, to defend himself against the accusations and to have the proceedings explained to him at every step of litigation, said Georgia defense attorney Ann Fitz, who is not involved in the Mitchell case.

"He is still being afforded an opportunity to view what’s going on and to hear the evidence being presented, so I think that guarantees his constitutional protections while removing the distraction and allowing the proceedings to continue," Fitz said

There’s the possibility that Mitchell’s behavior may even help his case, Fitz pointed out. His lawyers have raised an insanity defense, claiming that he Mitchell was so delusional he could not understand his actions were wrong when he abducted Smart. Several mental health experts testified for the defense, offering diagnoses that ranged from delusional to psychotic to paranoid schizophrenic.

"If he is so convinced in his mind that he is a prophet and that the kidnapping and rape of a young innocent girl was somehow part of his religious beliefs, then that would negate the criminal intent of actually committing crime for a malicious purpose," Fitz explained.

"If he's displaying this persona of someone who sing songs and that all goes along with the religious insanity defense, I think that’s helpful to him," she said.

Mitchell has been far less obstreperous than Bobby Seale, a founder of the Black Panthers who was one of eight defendants to stand trial for the violent demonstrations at the August 1968 Democratic National Convention in Chicago.

More "Disorder in the Court" on truTV.com

Seale repeatedly called U.S. District Judge  Julius Hoffman a "pig," a "fascist" and a "rat," and the judge ordered Seale gagged and bound to his chair.

But Seale wasn’t the only one to rankle Hoffman during the trial, which turned into a venue for the defendants to espouse their political beliefs. By the trial's end in February 1970, Hoffman had found the defendants and their attorneys guilty of 175 counts of contempt of court and sentenced them to jail terms from two to four years.

Larry Flynt, founder and publisher of Hustler, appeared in court throughout the 1970s and 1980s on charges related to the edgy smut on the pages of his magazine. He sported T-shirts with expletives and provocative slogans in court and wore an American flag as a diaper during his obscenity trials.

Flynt was jailed for contempt on numerous occasions.

In some cases, a defendant can't help but who he is, and that also sends a message to the jury, said Lisnek, the trial consultant. Whether that message helps or harms someone depends on whether jurors base their verdict solely on the evidence.

"As a jury consultant, we’re concerned about all sorts of things nonverbal. We tell our clients, the jury is always looking at you," he said. "They’re watching everything."