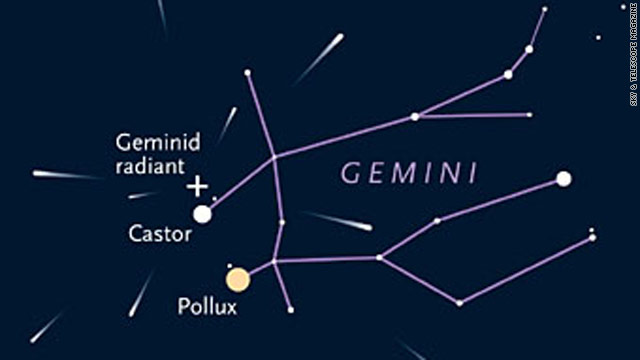 A clear sky on Monday night will offer the best viewing of one of the year's busiest meteor showers.

The Geminid meteor shower produces as many as 120 shooting stars an hour, or an average of two a minute, visible under a dark sky, Alan MacRobert, senior editor of Sky & Telescope magazine, said.

The sky will be the darkest after the first quarter moon sets, between 11 p.m. and midnight in your time zone.

"Go out late in the evening, lie back, and gaze up into the stars," MacRobert said. "Relax, be patient, and let your eyes adapt to the dark. The best direction to watch is wherever your sky is darkest, probably straight up."

Geminids can appear anywhere in the sky, the magazine said. Small ones appear as tiny, quick streaks. Occasional brighter ones may sail across the heavens for several seconds and leave a brief train of glowing smoke.

The Geminid meteoroids are tiny bits of rocky debris about the size of a pea shed from a small asteroid named 3200 Phaethon. Over the centuries these bits have spread all along the asteroid‚Äôs orbit to form a moving "river of rubble" hundreds of millions of miles long," according to the magazine.

Earth‚Äôs annual orbit around the Sun carries us through this stream of particles every mid-December.