Actress Tawny Kitaen, who appeared in the movie "Bachelor Party" and provocative 1980s rock videos, has died at ageātwitter.com/i/web/status/1ā¦gt

Ahead of the start of hurricane season, the first tropical disturbance of the 2021 storm season has formed off theātwitter.com/i/web/status/1ā¦yj

At least 25 people have been killed and 52 others wounded in an explosion near a high school for girls in the Afghaātwitter.com/i/web/status/1ā¦zE

A cyberattack forced Colonial Pipeline, the operator of one of the US' largest pipelines, to temporarily suspend opātwitter.com/i/web/status/1ā¦oU

The Mars Ingenuity helicopter successfully completed a flight, this time a one-way journey to its new home about 42ātwitter.com/i/web/status/1ā¦Pv 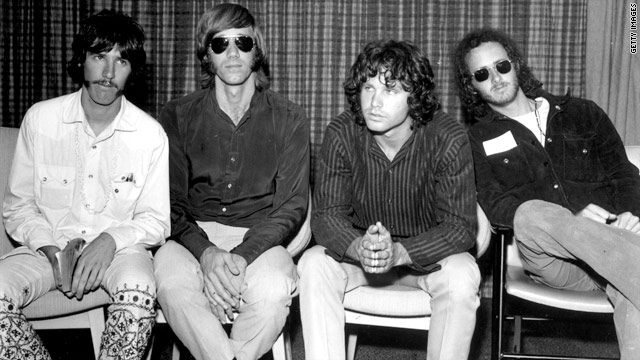 "The End" of a conviction: Lame-duck Florida Gov. Charlie Crist is expected to pardon singer Jim Morrison on Thursday for a 1969 indecent exposure conviction.

Morrison (second from right), lead singer of the Doors, was convicted a few weeks after a Miami concert in which he allegedly dropped his pants and exposed himself, though no photos of Morrison committing the act were introduced into evidence.

The Doors canceled their tour after the conviction. Morrison died in Paris in 1971.

"Blade" behind bars? Actor Wesley Snipes has not received a pardon and is expected to report to federal prison Thursday to begin serving a three-year sentence for failing to file tax returns.

"We still have prayers out there. We still believe in miracles. So don't send me up the river yet," Snipes said on CNN's "Larry King Live" on Tuesday night.

Prosecutors said Snipes earned $40 million since 1999 but had filed no returns and had been involved in a tax resisters group.

Snipes disputed such involvement and said that the failure to file was his advisers' fault.

"Don't ask" vote may come soon: Speaking of taxes, the U.S. Senate initially put off a vote on repealing the "don't ask, don't tell" law until it completes work on the tax-cut deal Republican lawmakers worked out with President Obama this week.

However, Senate Majority Leader Harry Reid may be pressing ahead for a Thursday vote on the military's policy toward gays anyway.

Republicans consider the tax legislation to be the Senate's top priority for its end-of-term, lame-duck session.

If the deal holds, the Bush-era tax cuts will be extended for two years. As a concession, Republicans agreed to extend unemployment benefits for 13 months; the payroll tax will drop by 2 percentage points for a year.

In the holiday spirit: On a lighter note for the White House, the National Christmas Tree lighting is scheduled for 5 p.m. ET Thursday. B.B. King, Maroon 5 and Sara Bareilles will provide musical entertainment.

CNN.com will carry the event live.

According to James Andrew Miller, author of "Live From New York, the Complete, Uncensored History of Saturday Nightātwitter.com/i/web/status/1ā¦GW
cnni

3:48 pm ET May 8, 2021 RETWEET
Maine-based startup Running Tide Technologies is experimenting with farming kelp in an effort to pull carbon from tātwitter.com/i/web/status/1ā¦Ci
cnni