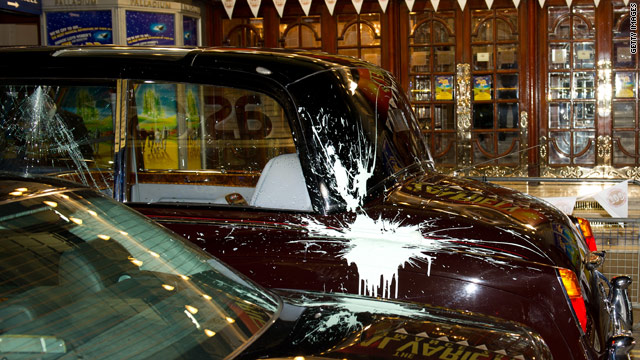 A perfect storm of royal watchers, Christmas shoppers, police and rioters was brewing near the London Palladium theater by the time Prince Charles and Camilla, Duchess of Cornwall, arrived Thursday night.

Given the circumstances, all it took was the right timing and an iPhone for a CNNI executive producer to capture some of the first video of the royal couple after protesters had attacked their car.

Of course, it probably also helped that CNN‚Äôs London bureau is right around the corner from the theater, Geoff Hill acknowledged.

The scene was chaotic before the royals arrived at the West End theater,¬Ý near the Oxford Street shopping district in central London. In a part of the city already swelled with tourists and Christmas shoppers, royal watchers had been gathering throughout the day to catch a glimpse of those attending the Royal Variety Performance, an annual holiday season gala attended by senior members of the monarchy.

Add to the mix scores of rioters with police close by, and you had a ‚Äúperfect storm‚Äù of calamity, Hill said.

The CNNI executive producer had stepped out of the office to meet a producer on the corner and pick up video from the day‚Äôs protests.

Then, it appeared: ‚ÄúThe unmistakable arrival of a very important person. The police outriders were there, the blue lights, and then the royal car,‚Äù he said.

He immediately knew where they were headed and ran around the corner to head them off. As he squeezed through the crowd, he saw Charles‚Äô and Camilla‚Äôs faces and then he noticed a large splatter of green paint on the back of the Rolls Royce and cracked glass on the window on Charles‚Äô side.

‚ÄúI realized, oh my God, the royal couple‚Äôs car had been attacked. I‚Äôd never seen anything like that before,‚Äù he said.

The crowd of gawkers also seemed shocked by the scene of the royals under attack, he said.

‚ÄúIt was unbelievably chaotic, incredibly batty. People were gasping because they could see it was Charles and Camilla, and they could see that the car was damaged,‚Äù he said. ‚ÄúThese people were waiting all day to take pictures of celebrities. I think they were kind of blissfully unaware of the demonstrations that had been happening. I don‚Äôt think they understood that the demonstrations had made it this far into the city.‚Äù

By this time, he had taken out his iPhone and begun to record the scene. As he raced back to the bureau to get the video on air, a CNN breaking news alert flashed on his iPhone, notifying him of what he‚Äôd just seen.

1:15 pm ET May 18, 2021 RETWEET
A 22-year-old man has been arrested in connection with the audacious heist in which around 100 of Europe's most pri‚Ätwitter.com/i/web/status/1‚Ä¶I4
cnni

12:31 pm ET May 18, 2021 RETWEET
A disaster has been declared in an Alaskan village after an ice jam caused severe flooding and forced residents to‚Ätwitter.com/i/web/status/1‚Ä¶Zj
CNNweather