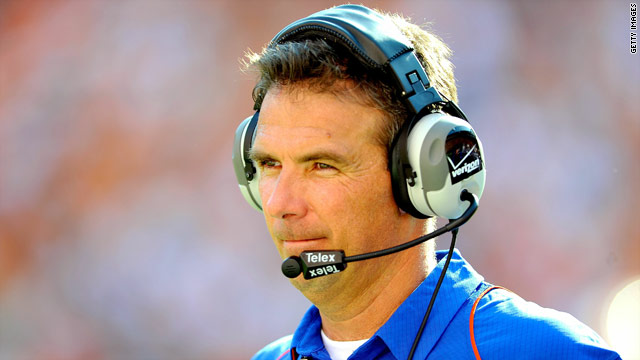 After 10 years at the helm of the Florida Gators' football program, coach Urban Meyer is stepping down, citing a desire to spend more time with his family. But will the decision stick? SI.com's Andy Staples sure hopes it does.

Staples approves not because of the Gators' lackluster record this season, but because it's time Meyer chose family over the 24-hour, seven-day-a-week grind of being a head coach.
"Sometimes, we make it too complex," Meyer said. "At the end of the day, I'm very convinced that you're going to be judged by how you are as a husband and as a father and not by how many bowl games you've won."

This isn't the first time Meyer has turned over the reins of the program. Last year, a health scare prompted him to retire ... only to return less than 20 days later.

Will being away from a team that he has led to two national and SEC titles be too much for Meyer to bear? Probably not. This time around is different than last year. There is no medication that can give Meyer the time back with his family that he clearly longs for. Only making - and sticking with - the decision to walk away from his program will do that.

As for the Gators, they'll be fine, eventually. SI.com's Stewart Mandel says that while Meyer is undoubtedly one of the school's greatest football coaches, the program will still have a leg to stand on if he decides to stick with his decision to resign. Though Florida has hobbled through 2010, inundated with staffing changes and the loss of some top players, the coaching change will not doom the team next season. With Dan Mullen, Bob Stoops and Jon Gruden all being eyed for the job, it shouldn't take long for the program to rebuild and regain traction.

Boston Celtics vs. Philadelphia 76ers (8 p.m. ET) - The Sixers are looking for their sixth consecutive victory tonight when they face the Celtics at the Wells Fargo Center. But look for the 17-4 Celtics to give Philly some trouble tonight on their first stop on a three-game road trip.

$137 million - The low end of the contract offer spectrum the New York Yankees have presented to ace pitcher Cliff Lee. The contract will fall somewhere in the $137 million to $140 million range and will be for six years.

17.4 -Points Duke star freshman Kyrie Irving had averaged this season before being sidelined, indefinitely, with a toe injury.

11 - Number of consecutive games the Pittsburgh Penguins have won. Their most recent victory came Wednesday night against the Toronto Maple Leafs.