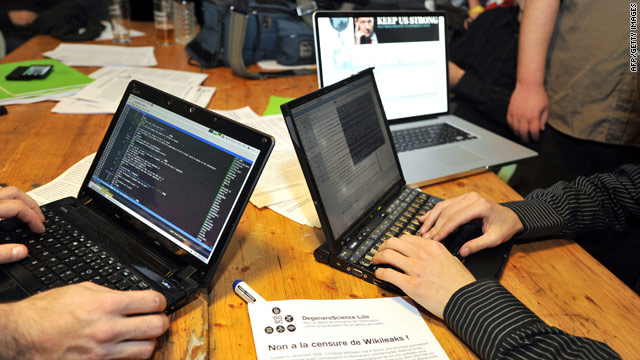 WikiLeaks latest – Julian Assange’s supporters have continued to wreak havoc on the internet as they hit companies who have withheld WikiLeaks payments as well as the Swedish government’s website.

Student protest - Today is the day that British MPs vote on whether or not to remove caps on students’ tuition fees and the last day for students to make their voices heard to the government, so large-scale protests are expected.Peace Prize - Friday in Oslo is the Nobel Peace Prize ceremonies ... a big event, but without the winner: Jailed Chinese dissident Liu Xiaobo.  There's no "presentation" this year, just an event marking the award.  Amnesty International is protesting China's treatment of Xiaobo by presenting a fake Nobel Prize to the Chinese Embassy in London.  China, in turn, calls Liu a "criminal", and is all set to give out its own first-ever peace prize Thursday, a counter to the Norwegian Nobel committee's choice.

Ivory Coast - Ivory Coast's political crisis continues, sparked by a disputed election that has seen two rival leaders lay claim to the presidency.  Laurent Gbagbo, the  incumbent, was declared the winner by the Constitutional Council. Opposition candidate Alassane Ouattara was declared the winner by the Electoral Commission, which said that he won 54.1 percent of the vote.

Olympic venue - HRH The Princess Royal will unveil the completed London 2012 Canoe Slalom venue outside of London, the first brand new 2012 venue to be finished. The Lee Valley White Water Centre will host the canoe slalom events during the Olympic Games. Before and after 2012, the venue will be used as a sporting and leisure facility for canoeing and white-water rafting, as well as a major competition and training venue.

Honeymoon murder - The husband of a bride who was murdered on honeymoon in SA may appear in a London court again today for a bail hearing.