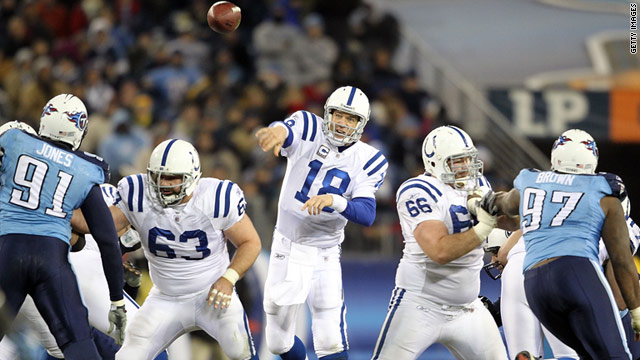 The Indianapolis Colts are not dead just yet. Nor is Peyton Manning.

The team snapped an uncharacteristic three-game losing streak Thursday by notching a 30-28 victory over division rival Tennessee. Manning, who had been the brunt of criticism of late after throwing a career-high 11 interceptions over the skid, led the way, passing for 319 yards, two touchdowns and, most notably, zero interceptions.

Despite a closer-than-reality final score, Thursday nightâ€™s game may appear to be a ho-hum victory for the Colts, but SI.comâ€™s John P. Lopez writes that it was nothing but.

Thursday night put the Colts in the unfamiliar position of a â€śmust-win regular-season game,â€ť something the franchise (which has made the playoffs the last eight seasons) hadnâ€™t experienced in almost a decade.

With the win, the team still controls its own playoff destiny, standing at 7-6 with three games remaining. But hardships are abundant. The Colts have a host of core players lost for the season on injured reserve (Dallas Clark, Bob Sanders, Jerraud Powers) and have even more banged up and standing on the sidelines (Joseph Addai, Austin Collie and Kelvin Hayden). In their place, the team has subbed in a smorgasbord of practice squad heroes and no-name free agents, presenting a huge challenge for Manning, the Colts and TV announcers alike.

This past week, media pundits and talking heads piled on Manning after the four-time MVP struggled as he rarely had before. Four of his 11 interceptions the past three weeks were returned for touchdowns, and people began wondering if Manning was just in a funk or, if at age 34, he was beginning to show signs of his eventual decline.

But against the Titans, the quarterback proved it was more of the former. He rarely threw into coverage, giving Tennesseeâ€™s defense nothing to feast on. And the Colts stayed dedicated to the run game (32 carries, 87 yards), keeping the Titans honest.

Despite the Coltsâ€™ slew of shortcomings, Lopez writes that the veteran squad shouldnâ€™t be counted out just yet.

â€śTheir running game showed signs of life against the Titans. Theyâ€™re getting healthier. The defense made a few key stops and they still have the most clutch kicker in football, perhaps, in Adam Vinateri, who iced [Thursdayâ€™s game] with a 47-yarder on a blustery night.

â€śItâ€™s probably not a wise move to bet against the Colts just yet.â€ť

Los Angeles Lakers at Chicago Bulls (8 p.m. ET, ESPN)
Two of the NBAâ€™s premier stars and premier teams face off when Derrick Rose and the Bulls (12-8) host Kobe Bryant and the Lakers (16-6). Chicago has lost its last seven games to the two-time defending champs.

40 â€“ Points scored by Ohio State forward Jared Sullinger in the Buckeyesâ€™ 76-64 win over IUPUI, marking the most points ever scored by an OSU freshman in a single game.

11 â€“ Consecutive wins for the Dallas Mavericks, the NBAâ€™s longest current winning streak, after coasting to a 102-89 victory over the New Jersey Nets.

400 â€“ Career victories for Temple coach Fran Dunphy after the Owlsâ€™ 68-65 upset victory over No. 10 Georgetown.

Roger Federer said Novak Djokovic had a "truly exceptional" year, even as the world No. 1 fell short of winning a câ€twitter.com/i/web/status/1â€¦cZ
cnni

10:20 am ET September 21, 2021 RETWEET
US President Biden is currently delivering his first speech to the United Nations General Assembly since taking offâ€twitter.com/i/web/status/1â€¦ZU
cnni