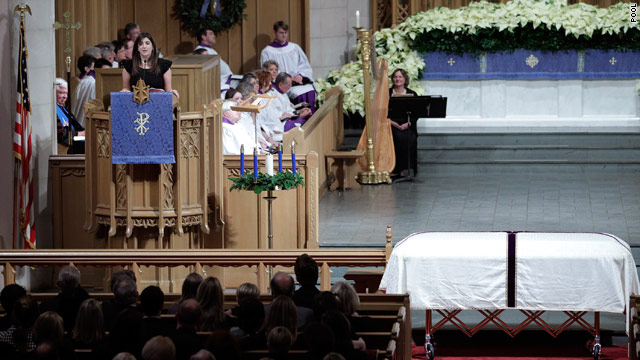 More than 1,200 mourners, including hundreds who loved and admired Elizabeth Edwards from a distance, packed a Raleigh church Saturday to pay respects to the activist and estranged wife of a failed aspirant to the presidency.

The mourners included Massachusetts Sen. John Kerry, who in 2004 picked Edwards' husband, John, to be his vice presidential running mate in an unsuccessful bid for the White House. John and Elizabeth Edwards separated earlier this year after the former North Carolina senator admitted to fathering a child out of wedlock while the couple was married.

John Edwards entered the church just prior to the start of the 1 p.m. service, holding hands with the Edwards' three children, Jack, Emma and Cate.

The funeral opened with a eulogy from Elizabeth Edwards' longtime friend Hargrave McElroy, who made the audience laugh with tales of Elizabeth's competitive nature, particularly with games. She also noted Edwards' love of Christmas, describing how the Edwards family, including John Edwards, decorated their Christmas tree last Saturday, just three days before she died after a long battle with breast cancer at the age of 61.