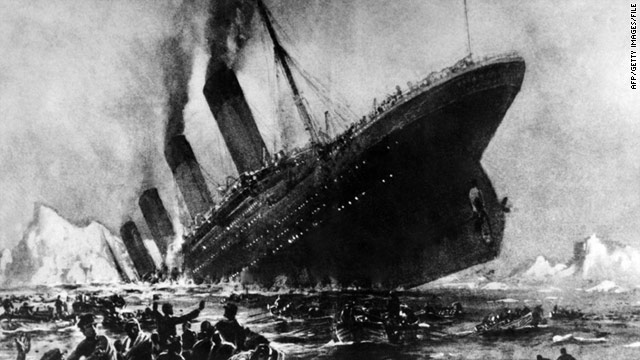 Bacteria scooped from the wreckage of the Titanic almost 20 years ago have been confirmed as a new species in the December issue of a microbiology journal.

While new scientific discoveries are usually heralded as joyous news, this discovery is bittersweet.

The bacteria, found on the ship's "rusticles" (rust formations that look like icicles), are eating the Titanic.

The strain, dubbed Halomonas titanicae, was initially designated BH1T in honor of the researchers who discovered it, then-graduate student Bhavleen Kaur and Dr. Henrietta Mann at Dalhousie University in Halifax, Canada.

The researchers tested the bacteria to see whether it was "good bacteria" or "bad bacteria," according to the school's website.

Let's just say the bug has an appetite for destruction.

"The BH1 cells stuck to the surface of these [small metal tags] and eventually destroyed the metal. So we knew we had a bad bacteria,” Mann is quoted as saying on the Dalhousie University website.

"In 1995, I was predicting that Titanic had another 30 years," said Mann, who still works at the university, according to CBS News. "But I think it's deteriorating much faster than that now ... Eventually there will be nothing left but a rust stain," she is quoted as saying.

The metal-eating bug presents a dilemma for scientists.

"Letting it proceed with its deterioration is also a learning process," said Kaur, who now works with the Ontario Science Centre, according to National Geographic. "If we stop and preserve it, then we stop the process of degradation," Kaur is quoted as saying.

The findings were published in the December 8 issue of the  International Journal of Systematic and Evolutionary Microbiology.

The Titanic, heralded in its day as the largest passenger ship in the world, sank on its maiden voyage in 1912, killing more than 1,500 people. The wreckage was found in 1985 by an expedition team more than 2 miles deep in the Atlantic Ocean.