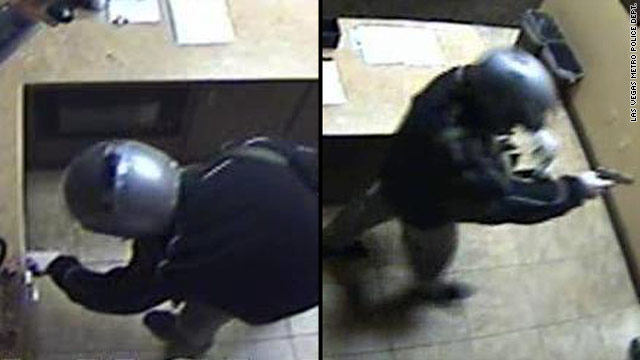 Police say they’re trying to find a helmet-wearing gunman who robbed one of Las Vegas' most recognizable casinos of $1.5 million in casino chips Tuesday morning – and may also have robbed a different casino last week.

With a helmet and visor hiding his face, the man rode to Bellagio casino (surveillance image, above left) on a motorbike, walked inside and pulled a gun at a craps table where several people were gambling at about 3:50 a.m., said Lt. Clint Nichols of the Las Vegas Metropolitan Police Department .

The gunman told everyone not to move, and then took the casino’s supply of chips "that were … [in] the box they keep on the craps table," Nichols said.

The man then ran back outside to the motorcycle, which he rode away, Nichols said. No injuries were reported.

The man might be the same person who robbed the Suncoast Hotel & Casino on Thursday morning, police said. In that robbery (surveillance image, above right), a man wearing a motorcycle helmet robbed the cage area of a poker tournament room of less than $20,000 in cash at about 12:30 a.m., Nichols said.