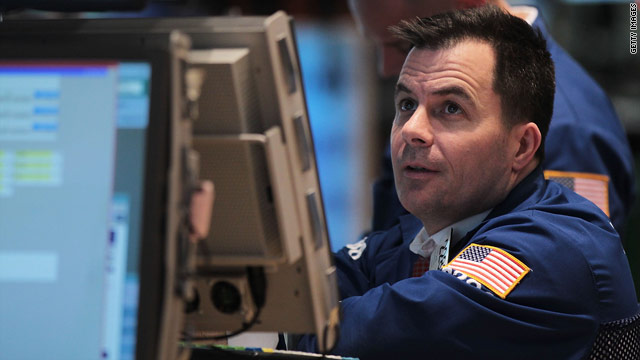 U.S. stocks eased off earlier gains but finished higher Tuesday, as investors found little reason to jump into the fray after the Fed kept rates steady and left its bond-buying plan alone.

About two-thirds of the 30 Dow issues advanced, with AT&T, Kraft Foods, Verizon, Johnson & Johnson and Microsoft leading the way. The S&P 500 and the Nasdaq briefly drifted into negative territory during the last hour of trade but also ended with gains. The S&P 500 rose 1 point, or 0.1%, and the tech-heavy Nasdaq added 3 points, or 0.1%.

Stocks had rallied out of the gate Tuesday morning, following a better-than-expected retail sales report from the U.S. Commerce Department, and held onto gains for most of the afternoon.

The Federal Reserve's announcement Tuesday that it will hold interest rates unchanged added pressure to an early sell-off, with Treasury yields moving sharply higher as prices continued to slide.

In its policy statement, the central bank said the unemployment rate remains "elevated" and progress toward a recovery is "disappointingly slow."

It also said it is moving ahead with its plan to pump $600 billion into the economy through the purchase of long-term Treasuries, its second round of quantitative easing, which has been referred to as QE2.

An Italian prosecutor on Saturday asked for life sentences for two American students charged with murdering a policâ€twitter.com/i/web/status/1â€¦sS
cnni

8:01 pm ET March 6, 2021 RETWEET
John Stamos shared the image of himself and Olsen, who is the younger sister of Mary Kate and Ashley Olsen, from thâ€twitter.com/i/web/status/1â€¦oL
cnni