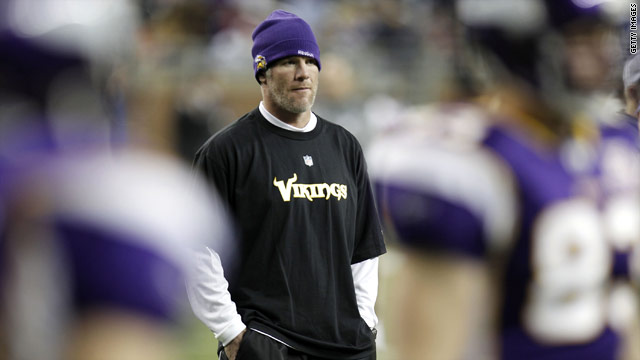 Where is Favre's place in sports history?

Say what you will about Brett Favre - about his wavering on retirement or his inability to make decisions. But there's one thing no one can take away from him - his dedication to the game.

In a sport where players are battered and bruised nearly every week, Favre took the hits consecutively 297 times.

"Now that it's over, and part of the history books instead of the NFL's week-to-week reality, Brett Favre's 297 consecutive starts streak deservedly will go down as one of the greatest individual accomplishments in sports. And nothing will ever change that, or lessen its impact," SI.com's Don Banks writes, noting the feat perhaps makes Favre the "toughest quarterback who ever suited up."

"To argue otherwise is folly. The beauty of a consecutive-games streak is that it has a quality of perfection to it - and you can't beat perfection," he said. "For almost 19 seasons, the man played every chance he had to play. Case closed. End of story."

The argument, perhaps, is over where that streak deserves to be placed in history. Where does it match up against say Cal Ripken playing 2,632 straight games for the Baltimore Orioles? Or what about Joe DiMaggio's 56-game hitting streak? Or "The Great One" Wayne Gretzky, who played 51 consecutive games with a point?

That depends on how you feel about the sports, the differing schedules, and whatever else you can bicker about, though most will argue Favre's streak most closely lines up with Ripken's.

As Time.com's Sean Gregory asks: "What's harder: standing on a baseball field for an hour or two, everyday, playing shortstop, or lining up under center once a week in football, where very large men are paid very large sums of money to knock you out of the game?"

"For the record, football and baseball are too widely divergent to truly compare. One game is far more physically demanding, but the other sport gets played almost every day for six months, with no six days to heal up between games. So there's no right or wrong answer as to which streak is pre-eminent."

Perhaps Favre's streak-ending moment doesn't rival that of Ripken's because of his indecisiveness. Perhaps some have filed him in the category of the peppered-haired man who is already retired instead of the way Ripken did it - on his own time.

"It was time," Ripken said of when he decided to stop playing and end his record. "Baseball has always been a team game. I talked to my wife [Kelly] and decided, 'Let's end it in the same place it started. In my home state. In front of friends and family. In front of the best fans in the world.' "

The celebration certainly wasn't the same. Favre wasn't passing a great like Lou Gehrig. His indecision may have given people qualms about whether he knew when it was time to stop playing. To some, the end of Favre's streak could be the conclusion of his career as well.

But that doesn't take anything away from all Favre has done on the field those 297 times he stood in between the hash marks, called a snap and tried to deliver a well-finessed ball to a receiver without being slammed into the ground (not that that didn't happen several times either).

And whether you like him or not, sports fans are talking about the streak Tuesday morning. And with some interesting facts as well, including that the Chicago Bears used 23 - that's right, 23 - quarterbacks in the time that Favre played back-to-back.

To put things in perspective, you only need to look at another number, the age of  Arthur Moats, who knocked Favre to the ground and eventually off the field. His Buffalo Bills jersey may have No. 52 emblazoned on it, but the number he's now known for is 4. That's how old he was when Favre's streak began in 1992.