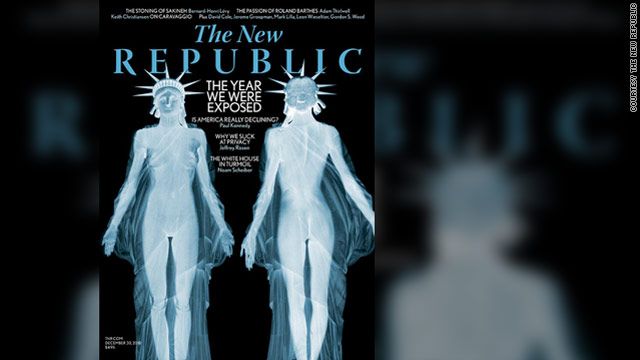 Is 2010 the year America was exposed?

That's what The New Republic suggests in its latest issue, whose cover depicts Lady Liberty as she might appear to Transportation Security Administration agents if she were to pass through a body scanner in one of America's airports.

On the body scanner controversy, journalist Jeffrey Rosen writes that "protecting privacy isn’t something that the U.S. government has ever done well," compared with European counterparts, because U.S. privacy offices lack independence and regulatory mettle.

"And, while the Department of Homeland Security’s privacy office has broader legal authorities than most, it nevertheless failed to raise the obvious objections to the body scanners. That suggests the government needs a genuinely independent institution dedicated to protecting Americans’ privacy in order to avoid similar debacles in the future," Rosen writes.

And it's not just body scanners. Changes in Facebook's online privacy policy made users' personal profiles more vulnerable to public viewing, causing us to reexamine our notions of privacy. Google Street Views opened up our homes to anyone with a Web browser. And in corporate America, the Gulf Coast oil spill exposed BP's questionable maintenance practices and apparent inability to control such a spill.

What do you think? Was 2010 a turning point for privacy rights in America? Or just another year of passing tides? Leave your thoughts in the comments section.