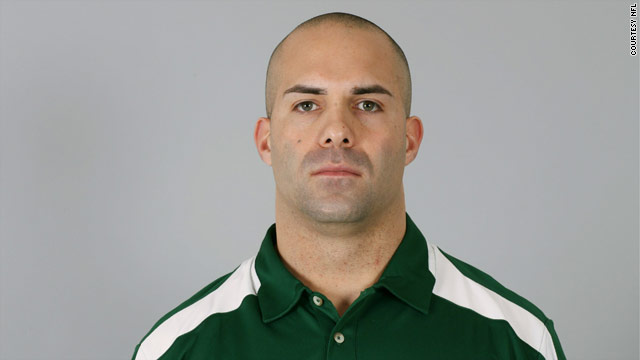 Jets trainer could be fired over new info about tripping

A New York Jets coach has now been suspended indefinitely - instead of for the rest of this season - after the team learned he instructed players to stand with him near their sideline before he tripped a Miami Dolphins player, the team said Wednesday.

The Jets said they're still reviewing the case of  strength and conditioning coach Sal Alosi, and that they could opt to fire him. Alosi tripped rookie Dolphins cornerback Nolan Carroll during a punt in third quarter of the Dolphins' 10-6 win over the Jets.

"The players at the Miami game were instructed by Sal to stand where they were, to force the gunner in the game to run around them," Jets General Manager Mike Tannenbaum told reporters Wednesday.

Carroll, covered by two Jets players, was running along the sideline toward the Jets punt returner when the incident happened at the New Meadowlands Stadium in New Jersey. Video shows Carroll was out of bounds and trying to run back in the field of play when Alosi - standing with Jets players on the out-of-bounds edge of the sideline - leaned his left knee forward. The knee caught Carroll, who tumbled to the ground.

Carroll was shaken up but eventually walked to his sideline on his own power. He returned to the game in the fourth quarter.

Alosi apologized to Carroll, the Dolphins' coach and others Sunday, and on Monday he told reporters that he "wasn't thinking."  Asked that day whether someone had instructed him and other Jets personnel to stand close to the sidelines to prevent the Dolphins from running out of bounds - something for which Miami was penalized earlier in the game - Alosi said: "No, that wasn't anything that was instructed."

On Monday the Jets suspended Alosi for the rest of the season and fined him $25,000. But the Jets continued to look at the play and then talked with players "who appeared to be standing in a wall-like formation with Alosi," the Jets said in a statement.

"It looked to me that it was unusual for them to be standing that way, and then on Tuesday we talked to the players involved, and that's when we were told they were asked to stand there by Sal," Tannenbaum said in a conference call with reporters Wednesday. "They were instructed by Sal throughout the game, but specifically when Miami was punting, they were asked to stand there by him."

"Once we got this new information, we actually met with the commissioner [Roger Goodell] and [vice president of football operations] Ray Anderson this morning. They support this initial decision that we presented to them, but the league is going to look into this as well, as they should," Tannenbaum said.

The Jets said they could choose to terminate Alosi's services.

"All options are certainly on the table," Tannenbaum said. "We're going to complete the review, get all the information. [Special teams coach] Mike Westhoff was not involved, [head coach] Rex Ryan is not involved, but we just want to be thorough and then make the best decision."