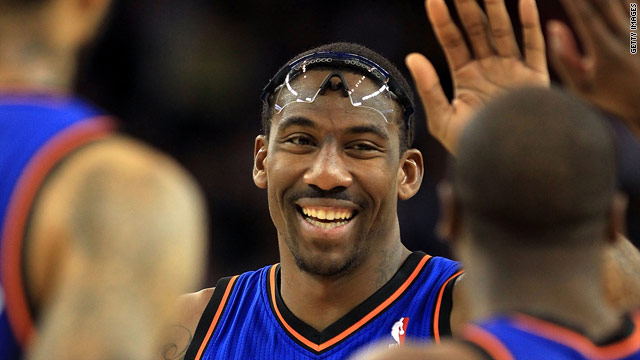 Many people would argue it's been awhile since the New York Knicks were relevant for anything other than Spike Lee. And that it's been even longer since the Knicks and the Boston Celtics played a meaningful game against each other.

But both of those are about to change. Two of the NBAâ€™s original franchises square off tonight at Madison Square Garden (7 p.m. ET, ESPN) in a match-up some are labeling a renewed rivalry and others are vehemently playing down.

â€śItâ€™s a rivalry?â€ť Celtics guard Paul Pierce jokingly asked reporters after practice Tuesday. â€śMan, yaâ€™ll are letting me in on all the new stuff, all the talk. I didnâ€™t know we had a rivalry going.â€ť

For the most part, they havenâ€™t. Since Kevin Garnett and Ray Allen joined up with Pierce in Boston, the Celtics have won 11 of 13 games against the Knicks, while New York has been known primarily for its losses over that period â€“ whether they be on the court, in a court or in The Kingâ€™s court.

But the Knicks are now amid a renaissance led by free-agent addition and early MVP candidate Amarâ€™e Stoudemire. New York has won 13 of its last 14 games and eight in a row, marking the teamâ€™s longest winning streak in more than 16 years.

Not to be outdone, the Celtics own a 10-game winning streak themselves â€“ the NBAâ€™s longest tear after the Dallas Mavericksâ€™ 12-game streak was snapped Monday.

"They're probably going to be extremely fired up for this game and I'm hoping our guys can match that intensity," Celtics coach Doc Rivers said.

The Celtics are the reigning Eastern Conference champions and won a title back in 2008, while the Knicks havenâ€™t made the playoffs since 2004 and havenâ€™t been considered a power to reckon with since the mid-90s.

But this year, the Knicks are averaging a league-high 108.5 points per game and added Stoudemire, who has scored more than 30 points in each of New Yorkâ€™s eight consecutive victories.

As for Pierce, heâ€™s still not ready to use the â€śrâ€ť word just yet in describing tonightâ€™s much-anticipated game.

"Hey, if that's what y'all want it to be, if it'll sell more tickets and get more viewers, then I guess so," he said. "You all make up the rivalries, we don't. To be honest, New York is playing well, they're in our division, and both teams are streaking, so it's going to be an exciting game."

What to watch (all times Eastern):

Cleveland Cavaliers at Miami Heat (7:30 p.m., Fox Sun Sports)
Round 2 of LeBron vs. Cleveland begins tonight, but this time in Miami. The Heat hasnâ€™t lost since notching a 118-90 victory against LeBronâ€™s old team on Dec. 2.

Portland Trail Blazers at Dallas Mavericks (9:30 p.m., ESPN)
After blowing a 25-point lead and having their 12-game winning streak snapped, the Mavericks look to get back in the win column against the Blazers, who have lost eight of their last 12 games.

17 â€“ Inches of snow that crushed the Metrodomeâ€™s roof and will force the Minnesota Vikings to play their Monday night game against the Chicago Bears at the University of Minnesotaâ€™s TCF Bank Stadium.

$750,000 â€“ Amount the New York Yankees paid to sign former Chicago Cubs pitcher Mark Prior to a one-year deal a day after losing out in the Cliff Lee sweepstakes. The Yankees had offered Lee a seven-year deal worth $148 million.

4:31 am ET January 27, 2022 RETWEET
A study shows that coffee plants will be "drastically" less suitable for cultivation in current coffee-producing reâ€twitter.com/i/web/status/1â€¦1r
cnni