The Supreme Court on Monday agreed to take up a major abortion case next term concerning a controversial Mississipp‚Ätwitter.com/i/web/status/1‚Ä¶5s 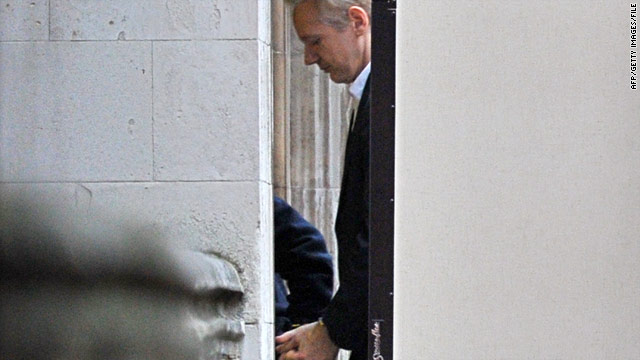 [Updated at 1:04 p.m.] Julian Assange, the editor of WikiLeaks, walked out of London's High Court after being freed on bail Thursday, nine days after he was arrested for questioning about alleged sex crimes in Sweden.

Assange was kept in solitary confinement in Wandsworth Prison in London, he confirmed Thursday after being freed on bail.

He also hailed the British justice system Thursday saying "if justice is not always an outcome ... at least it is not dead yet."

[Updated at 8:39 a.m.] WikiLeaks editor Julian Assange was granted bail by a court in London Thursday.

Assange "clearly has some desire to clear his name" of sex crime allegations he is facing in Sweden, making it less likely that he will abscond, Judge Duncan Ouseley said Thursday in deciding to grant him bail.

Cheers went up from his supporters outside the High Court as the decision was announced.

He was arrested last week in London because Swedish prosecutors want to question him about sex charges unrelated to WikiLeaks.

5:48 pm ET May 17, 2021 RETWEET
Even though hurricane season is still a couple weeks away in the Atlantic Ocean, the National Hurricane Center bega‚Ätwitter.com/i/web/status/1‚Ä¶Yl
CNNweather

5:40 pm ET May 17, 2021 RETWEET
New York will adopt the US Centers for Disease Control and Prevention's guidelines to not require masks or social d‚Ätwitter.com/i/web/status/1‚Ä¶04
cnni

4:46 pm ET May 17, 2021 RETWEET
Next month, the Office of the Director of National Intelligence and other agencies are scheduled to deliver unclass‚Ätwitter.com/i/web/status/1‚Ä¶uh
cnni