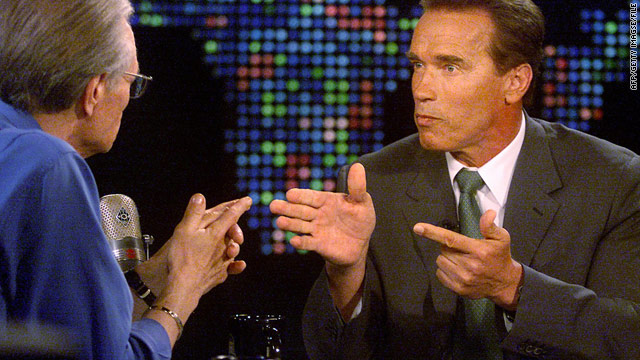 "Larry King has transformed himself into a household name. An indisputable legend in both the entertainment and media industries, King has changed the concept of the talk show within his lifetime," a proclamation signed by Schwarzenegger reads.

"King’s unique and direct interviewing style quickly transformed his show into one of the most renowned and celebrated talk shows on cable. From politicians and celebrities to musicians and athletes, it became an honor to publicly share important news first on 'Larry King Live.' "

The proclamation also describes King, whose show is filmed in California, as "a valuable friend, dependable supporter and well-wisher" of the state, noting that he is a Dodgers fan who enjoys many famous California restaurants, including the Beverly Hills deli, Nate 'n Al.

"Larry King has done much more than provide fantastic interviews, profiles and news coverage over the last 53 years. He has used his fame and influence to raise money and awareness for many worthwhile causes and charitable organizations. His departure from “Larry King Live” is an important milestone and turning point in the history of broadcast television."

King will hang up his suspenders after tonight's show at 9 p.m. ET.

Read more: For 25 years, it has been good to be King