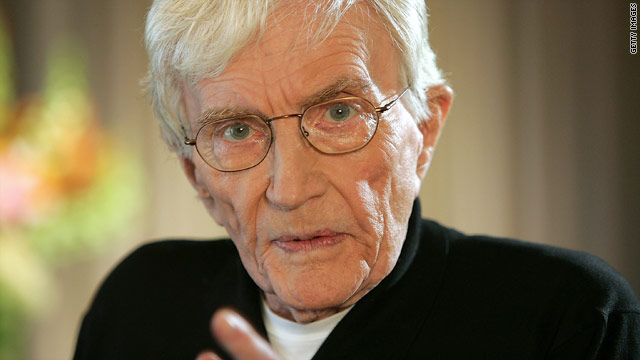 Director Blake Edwards, best known for his "Pink Panther" film series and "Breakfast at Tiffany's," has died at the age of 88, his publicist said Thursday.

Edwards' wife, actress Julie Andrews, and other members of his family were beside him, Schwam said.

Edwards was the recipient of an honorary Oscar in 2003, when he was praised for establishing himself as one of Hollywood's true comedy auteurs.

Edwards is credited with directing 46 titles, including "Victor Victoria," "S.O.B.," "10," and the Pink Panther series.
Edwards was particularly noted for his creation of the role of Inspector Clouseau in the Panther series, a character played by Peter Sellers, with whom Edwards became an iconic filmmaker for comedies.

"Peter Sellers became a monster," Edwards once said. "He just got bored with the part (Inspector Clouseau) and became angry, sullen and unprofessional. He wouldn't show up for work and he began looking for anyone and everyone to blame, never for a moment stopping to see whether or not he should blame himself for his own madness, his own craziness."

He also wrote for the big and small screen and acted in a number of films, starting in 1942 with "Ten Gentleman from West Point."

Edwards is said to have become romantically involved with Julie Andrews after she heard him once describe her as being "so sweet she probably has violets between her legs."

They began dating after she sent Edwards a bunch of violets and a note. They later married.

What should you do when forecasters say there is a hurricane headed your way? There are many steps you can take to‚Ätwitter.com/i/web/status/1‚Ä¶09
cnni

11:00 pm ET September 25, 2022 RETWEET
Japan, one of the world's last major holdouts during the pandemic, is dissolving its Covid-19 restrictions and open‚Ätwitter.com/i/web/status/1‚Ä¶Ko
cnni

What should you do when forecasters say there is a hurricane headed your way? There are many steps you can take to‚Ätwitter.com/i/web/status/1‚Ä¶09
cnni

11:00 pm ET September 25, 2022 RETWEET
Japan, one of the world's last major holdouts during the pandemic, is dissolving its Covid-19 restrictions and open‚Ätwitter.com/i/web/status/1‚Ä¶Ko
cnni