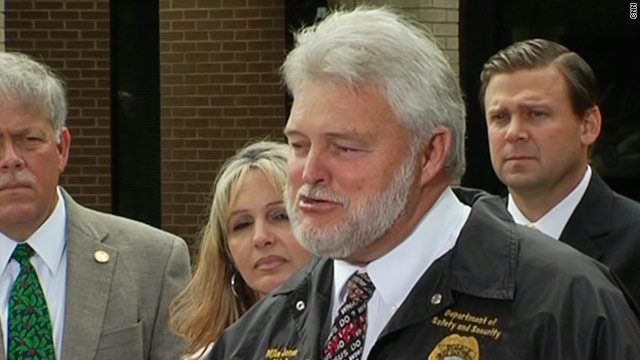 School guard who shot gunman: I thought I was too late

A security officer who wounded a gunman holding six Florida school officials hostage this week says he thought he intervened too late to save the district superintendent, who he thought had been killed moments beforehand.

When the gunbattle was over and the gunman had fatally shot himself, Mike Jones, chief of security for Bay District Schools in Panama City, was in for a surprise, he said Thursday.

"The next thing (that) happened was the superintendent came across the desk and (showed) that he was OK, and thatās when I lost it," Jones told reporters at a news conference.

Police and school officials have hailed Jones as a hero for shooting Clay Duke, 56, after Duke fired his gun Tuesday in the direction of Superintendent Bill Husfelt, who was seated behind a desk with five school board members in the boardās meeting room.

The incident began when Duke stood up during a public-comment portion of the school board's meeting, spray-painted a red "V" with a circle around it on the wall and brandished a handgun, police said. He ordered the room cleared except for Husfelt and the five male board members, and said he was upset that the district had fired his wife.

Jones, who was upstairs at the school district headquarters, got a call about the situation and went to the meeting roomās door, hoping to draw Dukeās attention.

"I tried to get this gentleman to come outside with me, to draw him away from the school board and the superintendent. That didn't work," he said.

Jones then closed the door and went outside to get ammunition from his vehicle. When he returned, he peeked into the room and saw Duke preparing to shoot. Video from a live internet feed provided by WJHG and WMBB shows Duke aiming at Husfelt and firing.

"I reached for the door, and it was too late ā he fired the first shot at the superintendent, and I thought (Husfelt) was dead," Jones said Thursday. "And I just opened the door and (Duke) and I went at it."

Police said 14 bullets were fired between the two, with Duke hitting no one. Duke, wounded by Jones, eventually shot himself, police said.

Jones said he cried when he realized that Husfelt and the board members were OK.

"(I thought) that I lost the superintendent and I'd let him down," Jones said. "ā¦ But just to see him, it was like seeing a newborn baby for the first time. I'm not lying to you, and I just canāt get that out of my mind.

"That's the picture that I see the most. I donāt see the shots being fired, I don't see the bullets. I see (Husfelt) ā¦ coming from behind that desk. And I knew that it was OK."

On Wednesday, Husfelt told reporters that Jones "saved our lives."

"I'm telling you that (Duke) was not going to stop shooting. He only turned around after he'd been hit twice by Mike, and Mike and him got into the shooting barrage, and that's what saved our lives, because he had more ammunition and he was going to keep going," Husfelt said.

Jones expressed amazement that neither he nor the school officials were shot. However, Duke's widow, Rebecca Crowder-Duke,Ā told CNN affiliate WJHGĀ that Duke knew how to handle guns, and she proposedĀ that he missed everyone on purpose.

See what else Jones had to say about the gunbattle.

For the sixth month in a row, the city of Rio de Janeiro has seen more deaths than births. Brazil's second most poātwitter.com/i/web/status/1ā¦lr
cnni

6:48 pm ET April 13, 2021 RETWEET
@jamesmurphypdx And I do. So maybe he didnāt care about my individual work which is fine. Like I said he didnāt know me.
sarasidnerCNN

6:40 pm ET April 13, 2021 RETWEET
A long-awaited US Army fact-finding investigation is expected to shed new light on why military helicopters were auātwitter.com/i/web/status/1ā¦o9
cnni

6:31 pm ET April 13, 2021 RETWEET
Even if the pause is prolonged, the US hasn't relied very heavily on Johnson & Johnson vaccine, and the governmentātwitter.com/i/web/status/1ā¦nq
cnni