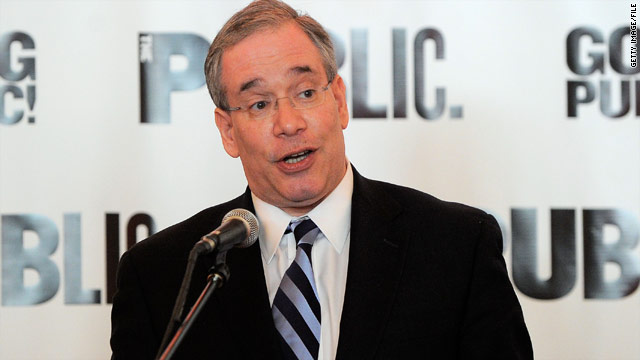 The Manhattan borough president used to Upper West Side living has learned quite a bit about the eastern part of New York's famous island - and the Second Avenue subway project he's behind but has never felt its impact. Until recently, when he had an eye-opener about the Upper East Side project, according to a New York Times report.

Stringer (pictured above) was forced to move right alongside the project at Second Avenue and East 83rd Street - after a fire gutted his home, according to the Times. Stringer has long heard complaints about the subway project - from angry business owners, to homeowners, renters and anyone who has had to deal with the noise of the constant construction or obstruction of their neighborhood.

But now, perhaps, Stringer isn't just listening. He's hearing. Not only what residents have been saying, but literally the drilling each morning as he wakes up. Talk about walking a mile in someone else's shoes. Or alongside a project that's been the bane of your reign.

“You don’t hear the birds chirping in the morning; you wake up when the drilling starts,” Stringer told the Times. “When I say goodbye in the morning to (my wife) Elyse (Buxbaum), I don’t say, ‘Have a happy day.’ I say, ‘Be careful of the construction outside.’ ”

Now, Stringer says having lived with the project, he's going to do what he can do help residents, according to the paper.

“People have a sense of outrage,” he told the Times. “They have stayed in the neighborhood because they believe in the project, but they want the government to do more.”

We may not be able to name her because she's the subject of medical research, but we can say this about the mother of three - she is a woman who fears nothing, literally.

"She doesn’t feel it. She has been held at knifepoint without a tinge of panic. She’ll happily handle live snakes and spiders, even though she claims not to like them. She can sit through reels of upsetting footage without a single start," Discover magazine writes. "And all because a pair of almond-shaped structures in her brain - amygdalae - have been destroyed."

She suffers from Urbach-Wiethe disease, which over time has destroyed the part of her brain associated with emotion, according to Discover. And she's one of a handful of people in the world who's shown "such striking damage," the magazine reports.

Her reactions are often off-kilter. The magazine reports several: She "hates" snakes but held one and said, "This is so cool." She even had to be told, despite her curiosity, not to poke or touch other more dangerous nearby snakes.

Researchers aren't going so far as to say the area damaged is really where fear is centered. They said, it's more like a "broker" going between different areas of the brain, some of which are also damaged. Either way, they've tested her for a range of emotions for nearly two decades, Discover reports.

And each and every time "we have been repeatedly impressed by her lack of insight into her specific fear impairments," Justin Feinstein, who led led a study, is quoted in Discover.

Meet the inventor of Gold to Go. You've never heard of him, you say? Perhaps because you've never needed to take gold bars out of an ATM. But Geissler now has you covered - and for the first time in the United States.

Not in Las Vegas or even Atlantic City, New Jersey - but Friday the ATM will be installed in the Town Center mall in Boca Raton, Florida, reports CNN affiliate WPBF-TV in West Palm Beach. Mostly, it's all about the novelty, Geissler told the station, but that doesn't mean he doesn't hope to expand the business to those who don't want to deal with the internet or pawn shops for buying gold.

So how does it work? Well, the prices will change every 90 seconds, depending on the rate of gold, but you insert cash or credit and use an ATM-like touch screen to choose whether you want a bar or coin of gold, according to reports.

"But who knows?" Cerabino writes. "Maybe this will be the next big thing in Boca. To hover around the gold vending machine, which adjusts its price every 90 seconds, and make a buy while you're waiting for the line to go down at Auntie Anne's pretzels."