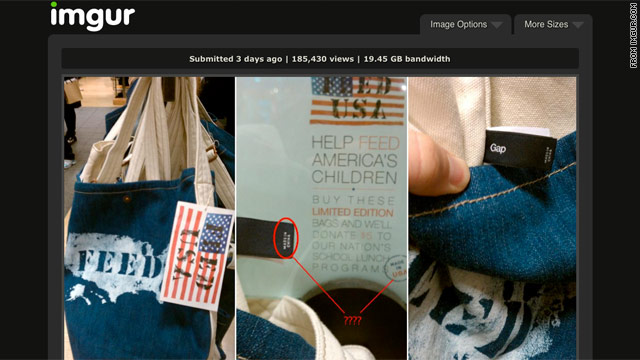 Gap apologizes for 'FEED USA' bags made in China

The Gap has apologized for "incorrect signage" in some stores that led to allegations that the clothing retailer was passing off bags produced in China as products that were "Made in the USA."

The mega-retailer is fixing signs in stores and online to ensure customers are not led to believe that its denim FEED USA bags, the sales of which benefit the anti-hunger charity, FEED Projects, were made in the U.S.

"There are several bags in the FEED USA collection.  The FEED USA Canvas Tote bag and the limited edition one-of-a-kind Bandana Bag are both made in the USA," spokeswoman Renate Geerlings said in an e-mail.

"However, the FEED USA Denim Bucket bags are made in China, and should not have been connected to the made in the USA signs. We apologize for any inaccurate messaging."

The confusion was first reported Wednesday in brandchannel.com, when a reader submitted an image of a rack of denim bags from the brand's FEED USA collection.

The bags were displayed next to a sign explaining the FEED USA campaign, which invited shoppers to "buy the limited edition bags and we'll donate $5 to our nation's school lunch programs."

Stamped on the sign was a "Made in USA" logo, which was true of most of the collection's bags, except for the denim bags in question, which bore "Made in China" tags.

(To be fair, the denim bags do not say "Made in the USA" anywhere on the actual product, unlike the other bags in the collection.)

The story sparked intense online debate over whether the Gap should be faulted for creating a campaign that invoked American patriotism while benefitting from overseas labor.

Some commenters on brandchannel.com and HuffingtonPost.com, which picked up the story, said the flap would discourage them from buying the bags. Others, meanwhile, said the story made an issue out of a nonissue at the expense of a legitimate charity.

For its part, the Gap was willing to apologize for the confusion.

"This is a case of incorrect signage. We understand how that could lead to some misunderstanding and we are taking steps to correct that," said Bill Chandler, vice president of corporate communications.

"Through this campaign, the Gap is donating $150,000," he said. "This shows how proud we are of the partnership and how we are committed to assisting school lunch programs."

What do you think? Leave your comments below.