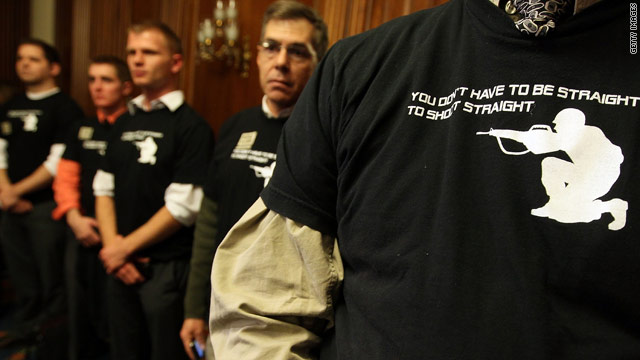 Four key GOP senators who have announced their support for a "don't ask, don't tell" repeal are prepared to join Democrats in voting to let the bill proceed, as long as Congress first deals with a measure to fund the government, aides to the four said Friday.

The aides said Susan Collins, Olympia Snowe, Lisa Murkowski and Scott Brown will vote Saturday to end debate on the ban on openly gay and lesbian people in the military if the Senate passes a stopgap spending bill, a continuing resolution to keep the government funded.

The four have previously said that bill must be approved first.

The Senate is currently working to craft a temporary spending bill, made necessary after Democratic leadership pulled a $1 trillion spending bill after Republicans abandoned their support of it.

The four senators' support for the "don't ask, don't tell" repeal would ensure the 60 votes needed to clear the way for the bill to advance even if Joe Manchin, a West Virginia Democrat, votes against it, as is expected.

6:42 pm ET May 13, 2021 RETWEET
Gaetz associate signals he will plead guilty in federal case, a worrisome development for the congressman washingtonpost.com/national-securŌĆ”
susancandiotti

5:30 pm ET May 12, 2021 RETWEET
RT @GasBuddyGuy: People- in the calmest voice possible- there is no risk of gasoline shortage outside of the Colonial Pipeline area. WHY WOŌĆ”
susancandiotti