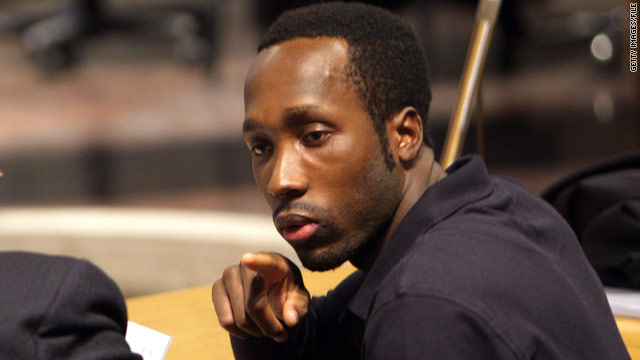 One of the men convicted of killing British exchange student Meredith Kercher in Italy three years ago has lost his appeal, his lawyer said Friday.

It means Rudy Guede, originally from the Ivory Coast, will continue serving his 16-year sentence for the crime after the court refused Thursday to overturn his conviction.

"Rudy is very disappointed," said his lawyer, Walter Biscotti. "We don't agree with the verdict because, starting today, there is an innocent man in jail."

Guede was originally sentenced to 30 years in prison for murder and attempted sexual assault, but he successfully appealed last year to cut the term to 16 years.

He is one of three people convicted of killing Kercher in Perugia, Italy, in 2007. Guede was tried in October 2008. Kercher's American roommate, Amanda Knox, and Knox's former boyfriend, Raffaele Sollecito, were convicted in a separate trial that concluded a year ago.

McDonald's is the latest restaurant to say it's raising wages in a bid to attract workers. The company is increasiâ€twitter.com/i/web/status/1â€¦7i
cnni

2:00 pm ET May 13, 2021 RETWEET
Drought conditions are now present across all of California for the first time in almost 7 years, making this year'â€twitter.com/i/web/status/1â€¦Jt
CNNweather

1:00 pm ET May 13, 2021 RETWEET
Record cold temperatures are making it feel more like winter across parts of the Southeast today, with wind chillsâ€twitter.com/i/web/status/1â€¦8n
CNNweather