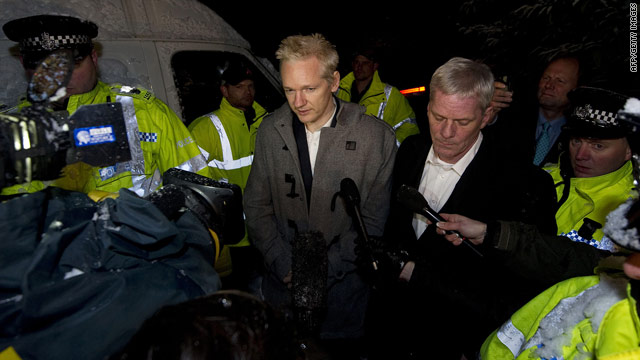 WikiLeaks - Now that WikiLeaks founder Julian Assange is out of jail, he's making up for lost time by talking to media outlets about sex allegations against him, saying he believes they are little more than an effort to discredit him and his organization for leaking diplomatic cables.

Assange (pictured, center, talking to reporters Thursday) also said the technological and legal attacks on his website are diverting resources from its core mission. But he said it has not slowed the group from publishing new secret diplomatic documents.

In fact, new cables have come out showing the United States and Cuba have been cooperating when it comes to fighting drug smuggling and others detailing allegations that India condoned torture of suspects in detention centers in Jammu and Kashmir, a region that's the secne of a long guerrilla war by Muslim separatists.

Tax deal - A bill that includes a two-year extension of the Bush-era tax cuts and an extension of jobless benefits is on its way to President Obama to be signed into law Friday.

CNNMoney.com takes a look at how the deal will impact taxpayers and whether it comes with a hefty price tag but not much bang for the buck.  Find out how your first paycheck in January will look different.

CNN also will be examining the politics behind the deal - how it got done and what kinds of trades and negotiations took place for the bill's passage.

North Korea - North Korea says it will launch a military strike if Seoul goes ahead with live-fire drills near Yeonpyeong Island over the next five days, Pyongyang's state-run KCNA reports.

The vice chairman of the U.S. Joint Chiefs of Staff said he was concerned that South Korea's live-fire artillery exercises planned for the coming days could be taken the wrong way and spark an uncontrollable clash with the North, but the U.S. State Department said the exercises are not meant to be threatening or provocative.