Bowling Green State University expels three students and suspends 17 in connection to the death of a student particâ€twitter.com/i/web/status/1â€¦bz 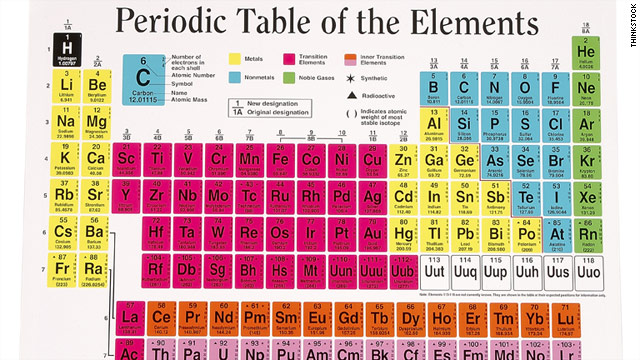 Periodic table gets a makeover

Remember memorizing the periodic table in high school? Well, forget it. Some information on the table is about to be reset.

The world's top chemists and physicists have determined that the atomic weights of 10 elements - ones you've actually heard of - need to be expressed as an interval (or range) rather than a static number, Science Daily reports.

"For example, sulfur is commonly known to have a standard atomic weight of 32.065. However, its actual atomic weight can be anywhere between 32.059 and 32.076, depending on where the element is found," the article explains.

The change will take effect in 2011, designated by the United Nations as the International Year of Chemistry, according to Science Daily.

No word yet from CBS on whether the changes will require major rewrites of upcoming episodes of "The Big Bang Theory."

8:04 pm ET July 30, 2021 RETWEET
When NASA returns humans to the moon, SpaceX will build the vehicle to land the first woman and next man on the lunâ€twitter.com/i/web/status/1â€¦io
cnni

8:00 pm ET July 30, 2021 RETWEET
As the US faces a surge in Covid-19 cases, Disney and Walmart have moved to require certain employees be vaccinated cnn.it/3yjmAbR
cnni

7:55 pm ET July 30, 2021 RETWEET
A children's hospital in Louisiana is experiencing a wave of Covid-19 hospitalizations as the Delta variant pervadeâ€twitter.com/i/web/status/1â€¦fa
cnni

7:35 pm ET July 30, 2021 RETWEET
"It's overwhelming. But I feel the love and it means so much." Bob Odenkirk tweeted his thanks "for the outpouringâ€twitter.com/i/web/status/1â€¦eR
cnni