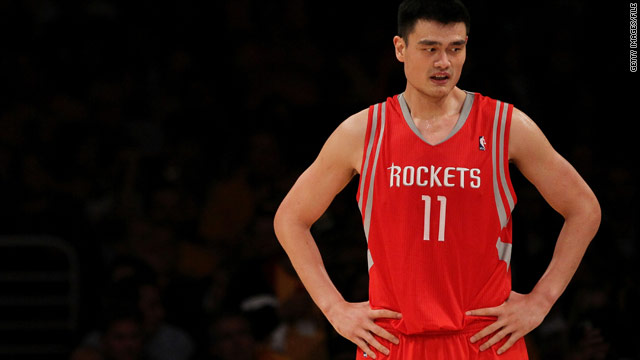 SI.com: Yao Ming goes from face of a nation, to face of frustration

Yao Ming was once the face of a nation.

When the Houston Rockets drafted him No. 1 overall in 2002, Ming represented not only his native China, but international basketball as a whole. He was a 7-foot-6 living testament that the best basketball players in the world didn’t necessarily come from our own backyard. He opened the floodgates for foreign players to come to America and show the NBA the brand of high-quality basketball being played overseas.

But after yet another injury that has derailed a once-promising career, Yao is quickly becoming the face of frustration.

The center’s latest setback comes in the form of a stress fracture in his left ankle, the same foot that underwent reconstructive surgery that sidelined him all of last season. Yao missed only three games over his first three seasons in the NBA, but Houston’s big man has now missed 173 regular-season games over his last five seasons.

This year was originally slated to be Yao’s grand return, but his ankle shut him down after just five games, and he’s been sidelined since Nov. 10.

Now comes news of a more serious injury than Yao expected and a grueling rehabilitation process lies ahead. Only Yao can decide if he wants to go through it once again. And at age 30, Yao is faced with his toughest decision since he decided to leave the Shanghai Sharks in 2002. Does he attempt yet another comeback? Or does he call it a career, albeit short and sweet?

SI.com’s Ian Thomsen writes the decision is ultimately Yao’s and his alone. Yao is a seven-time All-Star and owns career averages of 19 points and 9.2 rebounds per game. But is he content?

“(Yao) has advanced to the second round of the playoffs once in his nine-year career, and this season marks the fifth time in six years in which he will have played fewer than 60 games,” writes Thomsen. “I would be surprised if Yao were to decide to retire. His pursuit of excellence has been defined by his stubborn, tireless and patient approach, and his love for basketball is unquestioned. But will he view this as another setback worth overcoming? Only he can make that decision now.”

Also reeling from the stress fracture is Yao’s team, the Rockets. At 10-15, Houston must decide if it wants to make a push for the playoffs or go into full-scale rebuilding mode, which would include not re-signing the oft-injured center once his contract comes off the books this summer. If that were to happen, Yao’s future would become even more muddled.

“It’s impossible now to speculate on Yao’s future beyond this stress fracture and this season,” writes SI.com’s Zach Lowe in his Point Forward blog. “If he works his tail off to get healthy again, it would seem likely that some team would sign him to a low-cost deal for the marketing potential alone. But Yao may not want that.”

Yao’s latest setback is a t blow to his career, the Rockets and basketball fans around the globe. Regarded as one of the nicest players around in the league, no one wants to see this international star’s career end this way.

Phoenix Suns at Dallas Mavericks (9:30 p.m., ESPN)
The Mavericks go for their sixth straight home win over the Suns when Steve Nash and Co. come to town.

2 – Wins in their last 22 games for the New York Islanders, who scored three goals in a 99-second span to notch a 3-2 victory over the Anaheim Ducks on Thursday.