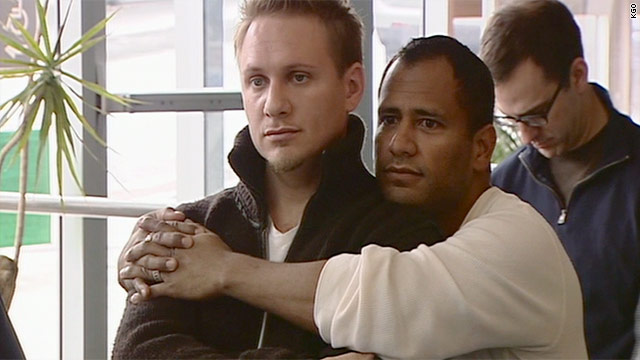 News of the U.S. Senate's vote to end "don't ask, don't tell" Saturday drew emotional reactions from both sides of the issue, with supporters of the repeal hailing it as a civil rights landmark and detractors calling it a threat to the armed services.

The reaction was loudest from those who supported a repeal of the Pentagon policy, which had officially banned open gays and lesbians from serving in the military for 17 years. Many reserved their praise for Republicans who had crossed traditional party lines to vote for repeal.

"With this vote, we have crossed one of the final hurdles standing in the way of ending the failed 'Don't Ask, Don't Tell' policy," said R. Clarke Cooper, Executive Director of the Log Cabin Republicans, one of several gay-rights organizations to lead the fight to defeat the policy.

The group praised Sen. Susan Collins, R-Maine, for her leadership in bringing other Republicans across party lines.

"Senator Collins, in particular, has long been the point of the spear in fighting for repeal among Republicans.  She showed tremendous leadership in crossing the aisle to make this vote happen, continuing the fight when many thought hope was lost.  Senators Brown, Kirk, Murkowski, Snowe and Voinovich also deserve our thanks for taking a principled stand for the integrity of all American service members. "

Former army lieutenant and gay-rights activist Dan Choi, who was discharged from service after publicly coming out in 2009, said the vote sent a message to closeted gays and lesbians that they have the support of the government.

"It's something that we've all expected. We know that when you're on the right side of justice and history, you don't ever go backwards. So this is the real moment," Choi told CNN.

"This is for all of those people in the military who are languishing, not able to come out to themselves, because they are so ingrained with this self-hatred, and it's a message. I hope it stiffens their spine."

Moments after the vote was announced, the Twitterverse lit up with comments over #DADT, but one in particular stood out that summed up the sentiments of many.

"We did it! #DADT is a thing of the past," Senator Harry Reid tweeted at performer Lady Gaga, an outspoken critic of the policy.

Gaga, who arrived at the 2010 MTV VMAs with openly gay service members and made viral videos calling for the end of DADT, also tweeted her reaction to the vote.

"Can't hold back the tears+pride. We did it!i Our voice was heard + today the Senate REPEALED DADT. A triumph for equality after 17 YEARS," she said.

But not everyone regarded the repeal as a step in the right direction.

"Today is a tragic day for our armed forces. The American military exists for only one purpose - to fight and win wars. Yet it has now been hijacked and turned into a tool for imposing on the country a radical social agenda," said Tony Perkins, president of the Family Research Council, a Christian organization that promotes what it calls "the traditional family unit and the Judeo-Christian value system upon which it is built."

"This may advance the cause of reshaping social attitudes regarding human sexuality, but it will only do harm to the military's ability to fulfill its mission," Perkins said in a statement.

People willing to voice their disapproval of the repeal were in shorter supply than their counterparts.

Those who chose to register their discontent cited the Pentagon report on "don't ask, don't tell" that found opposition to repealing the policy ranged from 40 to 60 percent among Marines and some combat arms specialist units.

"the only ppl who care one way or the other about #dadt, and have it matter, are combat troops. 60% say it hurt their units' ability to fight," conservative commenter and Tea Party activist Brooks Bayne tweeted Saturday.

"i'm more concerned about natl security and morale of combat troops than i am someone's lifestyle choice being validated politically," he later tweeted.

Before the final vote, Senator John McCain, a vocal supporter of "don't ask, don't tell," said "today is a very sad day," according to the Atlantic.

Allowing gays to serve openly in the Marines could prove to be a deadly distraction, McCain said.

He also lambasted his colleagues for pushing the vote through in a lameduck session.

"We are jamming - or trying to jam - major issues through the Senate of the United States because (Democrats) know they can't get it done beginning next January," McCain said, the Sacramento Bee reported.

He did, however, voice his approval of the failure of DREAM act, which offers a path to citizenship to some illegal immigrants who entered the United States.

Known formally as the Development, Relief and Education for Alien Minors Act, the DREAM Act fell five votes short of the 60 needed to be considered for final passage.

“With respect to the DREAM Act, I have great sympathy for the students who would benefit from passage of this legislation. I have met personally with many of them and their stories are heart-wrenching," he said on his wesbite.

“However, I cannot put the priorities of these students, as difficult and unfair in many respects as their situation is, ahead of my constituents and the American people who demand that the Federal government fulfill its Constitutional duty to secure our borders before we undertake other reforms."

The parallels between the two votes did not go unnoticed in the Twittersphere.

"Bittersweet day: #DADT repealed, and #DREAM Act squashed. Maybe one day we can all have equal rights," @smartygreg tweeted.

Others has a less sympathetic view of the Senate's busy day: "What do #DREAM, #DADT, and Food Safety all have in common? They don't create any jobs."