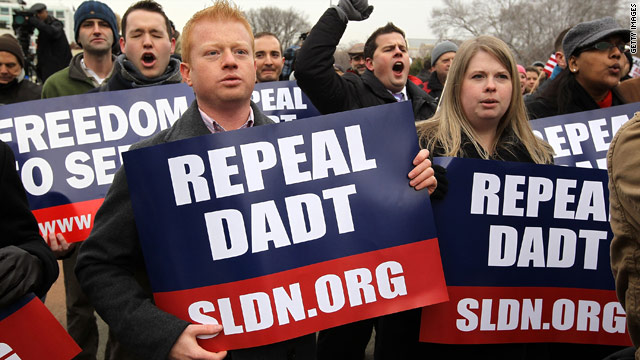 [Updated at 3:30 p.m. ET] Members of the U.S. Senate voted 65-31 on Saturday to repeal the military's "don't ask, don't tell" policy, which bans openly gay people from serving in the armed forces. With House of Representatives legislators having voted similarly Wednesday, the bill now goes to the desk of President Barack Obama, who is expected to sign it.

[Posted at 11:51 a.m. ET] The U.S. Senate voted Saturday morning to end debate on whether to repeal the military's policy banning gay men and lesbians from military service.

The 63-33 vote on the cloture motion sets the stage for a direct vote on ending the policy, known as "don't ask, don't tell."

The Senate will hold a final vote on the repeal at 3 p.m.

5:42 am ET April 15, 2021 RETWEET
95% of Evangelical leaders in a survey said theyâ€™re open to getting a Covid vaccine. But the number of White Evangtwitter.com/i/web/status/1â€¦GJMl
cnni

5:19 am ET April 15, 2021 RETWEET
The first Yeezy sneakers ever worn in public by Kanye West are going on sale for over $1 million. cnn.it/3mLVBAS
cnni

4:30 am ET April 15, 2021 RETWEET
The FBI has more than 2,000 investigations that tie back to the Chinese government and is opening a new one "everyâ€twitter.com/i/web/status/1â€¦Ks
cnni