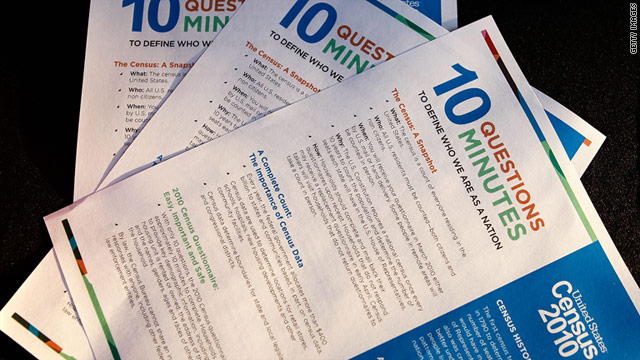 Results of 2010 Census to be released

How many people live in the United States, and which states will gain and lose congressional seats as the result of population shifts?

The U.S. Census Bureau will answer those questions Tuesday.

The first official results from the 2010 Census will be released at 11 a.m. ET, including the nation's total resident population and new congressional apportionment totals for each state.

The census determines how many representatives each state gets in Congress, and states base the size and shape of their districts in part on census figures.

CNN.com and CNNMoney.com will provide complete coverage, including a look at the fastest- and slowest-growing states. The data could provide insight into whether the nation's two-year economic downturn has forced people to move.

You can watch a live webcast of the announcement here.

And while the government may not be known for kicking out exciting graphics, the Census Bureau has posted a cool interactive map showing how the population has moved with every 10-year count since 1910.

The Census Bureau has previously released snapshots of data through the American Community Survey, but that is based on sampling, not on the complete count taken last spring.

The percentage of the adult population not working because of Covid-related reasons tripled between December and Jaâ€twitter.com/i/web/status/1â€¦QI
cnni

3:43 pm ET January 21, 2022 RETWEET
The past 22 months have forced many companies to recruit, work and retain talent remotely. And that means some workâ€twitter.com/i/web/status/1â€¦LE
cnni

3:00 pm ET January 21, 2022 RETWEET
The Prince Andrew High School in Dartmouth, Nova Scotia, will be renamed as the sex abuse civil case against the Brâ€twitter.com/i/web/status/1â€¦JK
cnni