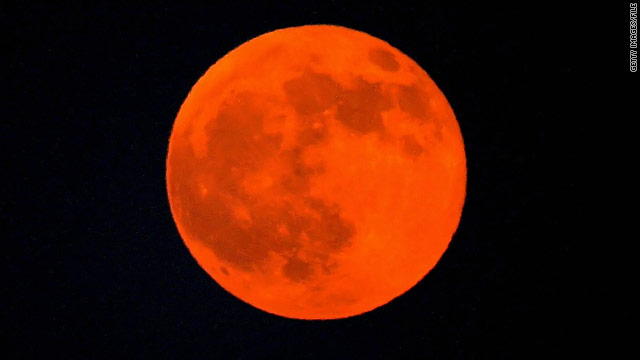 Why is this significant, besides being so rare that it hasn't happened since Galileo was living out his days under house arrest? For eclipse watchers, it means "that the moon will appear very high in the night sky, as the solstice marks the time when EarthŌĆÖs axial tilt is farthest away from the sun," according to NASA.

Scientists aren't the only ones interested in the confluence. To astrologers,┬ĀTuesday morning's┬Āpackage┬Ā- the Northern Hemisphere's darkest day of the year, a full moon and a total lunar eclipse - is a doozie.

A full moon, the culmination of a cycle, portends endings, and a winter solstice gets people feeling an energy of withdrawal, in the manner that allows animals know itŌĆÖs time to hibernate, he says. With Mercury also in retrograde, now is the time for reflection and introspection, he says.

"The four big planetary phenomenon at the same time tell us to slow down and see whatŌĆÖs going on," Hill said Monday. "Everything is saying, 'Slow down, we're moving way too fast, and really take a look at what weŌĆÖre doing, where weŌĆÖre going and what we want to do.' "

Another Florida astrologer, Bob Mulligan, told the News-Press of Fort Myers he also sees the solstice/eclipse confluence as a big deal: "With solstices, we traditionally mark the beginning of seasons as turning points. Full moons are times of great stress on the planet. A lunar eclipse is a full moon on steroids; symbolically, itŌĆÖs a time of letting go of something from the past."

A lunar eclipse happens when the Earth lines up between the sun and the moon, blocking the sunŌĆÖs rays and casting its shadow on the moon, NASA says, and eclipse watchers will be in for a colorful treat.

As the moon moves into EarthŌĆÖs shadow, it appears to change color, turning from gray to orange to deep red. The new color stems from indirect sunlight that passes through EarthŌĆÖs atmosphere and casts a glow on the moon, according to NASA. No special equipment is needed for viewing, unlike solar eclipses.

The┬ĀUrsid meteor shower might also be in view Tuesday morning, thanks to the blocking of the moonlight, Space.com reported.

If you miss this lunar eclipse, you'll get your next shot at seeing one in the continental United States on April 15, 2014. But you have quite a while to wait for the next lunar eclipse on a solstice┬Ā- that won't happen┬Āfor another 84 years,┬ĀChester said.