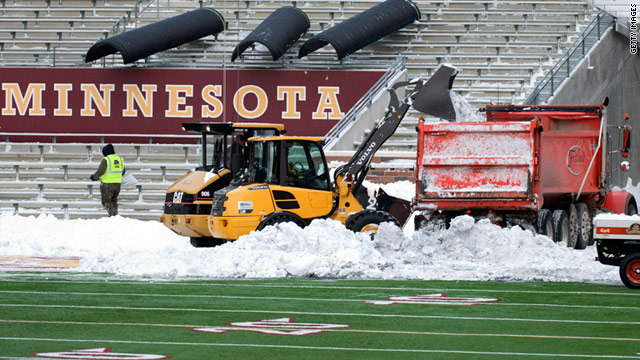 "All respect to the people that cleared the field and got it ready, you did an amazing job," Kluwe tweeted Sunday after the team conducted a walk-through at the University of Minnesota's stadium (pictured). "That being said, it's unplayable."

The game was moved to the outdoor venue after the roof collapsed at the Vikings' cozy indoor stadium, the Metrodome, under heavy snow December 12. Last week's Vikings game against the New York Giants was moved to Detroit's Ford Field, which has a roof.

Kluwe tweeted that walking on the TCF Bank Stadium turf was "like walking on concrete. ... I can only hope, however unlikely, that no one gets catstrophically (sic) injured at the trainwreck that's about to take place (Monday) night."

The punter's complaint drew some sharp jabs from other Twitter users.

"Wow, talk about being soft," wrote Heath Stanton (caddis11). "Isn't there a video game u need to be playing?" (Kluwe is an avid "Worlds of Warcraft" player.)

"RU daft? What kind of fields do you think the pre-metrodome Vikings played on. Man up! I've played rugby on fields like that," wrote Tim Litzinger (Jumper2point0).

A couple of those pre-Metrodome Vikings, who weren't allowed to wear gloves or congregate around sideline heaters, did weigh in.

"You've got to learn to tough it up," 1973-79 running back Chuck Foreman told the St. Paul Pioneer-Press. "That field will be perfect to play on. That's the way the game has been played for years. These guys get spoiled. Go out there, embrace the weather, enjoy it. Just keep yourself warm. It's all mental."

Mental toughness is what got players through the "frozen tundra" days, former receiver Ahmad Rashad said.

"If you get caught up in how cold it is or the field's too hard or you can't get your cleats in the field, you've got no shot," he told the Pioneer-Press. "It's the same for both teams; you just have to go out there and execute."

The Twin Cities are under a winter storm warning until Tuesday morning, with five to 7 inches of snow expected and temperatures in the lower 20s, with 10-mph to 15-mph winds, according to CNN affiliate KARE-TV in Minneapolis-St. Paul.

Someone, either from the team or the NFL, apparently put the kibosh on Kluwe's complaints Sunday afternoon.

"I've been asked not to tweet anymore about the field so as not to distract teammates (who were there) and I will honor that," he tweeted. "Time for WoW."