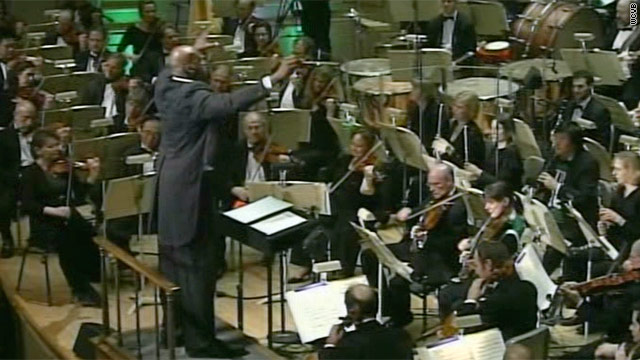 The Big Baton steps up

Researchers are still checking, but it's a good bet the Boston Pops Orchestra has never had a bigger conductor than it had Monday night.

Boston Celtics center Shaquille O'Neal - all 7 feet 1 inch and 325 pounds of him - donned a black tie and tails to conduct the Pops and the Tanglewood Festival Chorus in the Christmas classic "Sleigh Ride" during a pops concert at Boston's Symphony Hall, CNN affiliate WCVB-TV reports.

Some of the musicians wore Celtics jerseys under their topcoats.

It was the latest in a long line of stunts, jokes and public appearances by O'Neal, who has been known by dozens of nicknames during his 18-year NBA career, including Shaq Daddy, the Big Fella, the Big Diesel, the Big Baryshnikov and the Big Aristotle.

His recent sideline enterprises include lip-syncing to a Beyonce song on a subway and posing as a statue on Harvard Square.