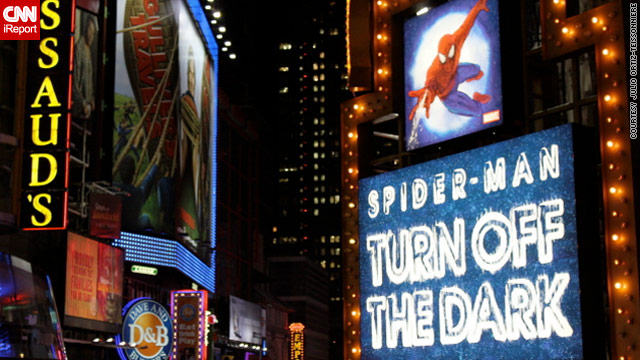 The Broadway musical "Spider-Man: Turn Off the Dark" is still in previews, which doesn't explain all the publicity, but may have something to do with the accidents and injuries to cast members.

News that an actor was seriously injured in a fall during Monday night's show is the latest in a series of cast injuries, technical difficulties and delays to beset the ambitious production, which involves the biggest budget in Broadway history, lots of aerial stunts and U2 frontman Bono.

Monday's accident was the third to befall a performer wearing a Spidey mask (nine performers play the masked Spider-Man due to the physical rigors of the role). Another cast member also suffered a concussion during the first preview performance, according to the New York Times.

"An accident  like this is obviously heartbreaking for our entire team and, of course, to me  personally," the show's director, Julie Taymor, said in a statement.

"Nothing is more important than the safety of our "Spider-Man" family and we'll continue to do  everything in our power to protect the cast and crew."

Before Monday's accident, Taymor had noted that other bad press hadn't affected the box office, and many fans say they are still anxious to see the show.

Actor Christopher Tierney's fall on Monday came three weeks after actress Natalie Mendoz, who plays the villain Arachne, suffered a concussion offstage during the first preview performance when she was struck in the head by a piece of equipment, the New York Times reported. That injury came little more than a month after the newspaper reported injuries to two other cast members who don the Spidey mask for stunts.

The show has earned several dubious distinctions since rehearsals began this summer, and a number of maxims and superlatives have been used to describe it, apart from the basic fact that its price tag, at $65 million, makes it the most expensive production in Broadway history.

It has been described as doomed and dangerous and parodied by Conan O'Brien. It is one of the most technically complex shows to appear on Broadway, with one of the longest preview runs, at 10 weeks, after being delayed four times.

It has also been described as one of Brodway's most anticipated productions, owing to the talents of Julie Taymor, the show's Tony and Emmy Award-winning director, whose previous credits include Broadway's "The Lion King" and films "Frida" and "Across the Universe."

iReporter on opening night: Spider-Man attempts to stick to Broadway

U2 fans also have a stake in the show, with bandmembers Bono and the Edge providing music and lyrics.

Taymor brushed off negative reaction to mishaps that befell the show's November 28 preview, from cast members suspended in midair to complaints of a confusing storyline.

"Whenever you do something that's highly technical with computers and flying and this and that ... it takes you a while to figure out all the things that can go wrong," she told CNN in early December in an interview at the premiere of her new movie, "The Tempest."

"In the tradition of previews, you're supposed to be given that four or five weeks to tweak it not just the technical, but also the book and the lyrics."

As for the bad press, she said, "I don't like it but on the other hand, it's not bad for box office.

"Our pre-sales aren't bad and the audiences give us standing ovations," she said. "I keep my focus on the prize which is making the show good. That's the prize and my collaborators and I, we love what we're doing."

Despite the mixed publicity, many die-hard Spidey fans remain undeterred.

"Any groundbreaking new musical will have tech issues. They will be ironed out," iReporter Allen Mealey, also of California, said.