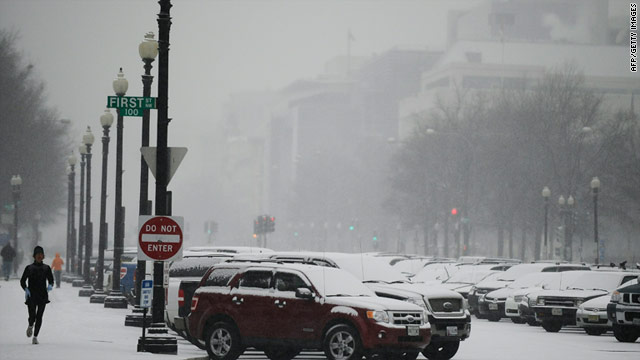 Winter solstice: What does it really mean?

Today, December 21, is the winter solstice, and what we like to refer to as the first day of winter.

But what does that really mean? Hasn't winter already started? In November and December, we've already seen extreme winter storms, and now there's a storm for the record books in the Southwest: Parts of┬Ā California recorded 9 feet of snow from Friday to Sunday, and could be looking at 20 feet by the time the storm ends.

So why do we wait so long to declare winter?

The first day of "meteorological winter" is December 1. Meteorologists like to break the year up into three-month chunks, which happen to coincide with the four seasons. Winter, for us, is December, January, and February. But traditionally, the rest of the world declares that winter begins on this, the shortest day of the year.

At 6:38 p.m. ET on December 21, the sun is directly over the Tropic of Capricorn, which is about 23.5 degrees south of the equator. For the Northern Hemisphere, the sun on this day is at the lowest point from the horizon for the entire year. The word "solstice" comes from the Latin word "solstitium," which literally means "the sun is standing."

For places in the Southern Hemisphere like Australia, Chile, Brazil, and southern Africa, it's the longest day of the year, and they're (usually) basking in warm summer weather.

This morning, I listened to holiday music and exchanged gifts and cookies with my co-workers. It's no surprise that many of our most important festivals and celebrations fall close to the winter solstice. It's the time when the nights get shorter and the days get longer, and culturally, it symbolizes rebirth. As CNN meteorologist Rob Marciano said, "Today begins a trend of longer days, shorter shadows, and the sun's relative migration back to the Northern Hemisphere."

So there's something to help you get through the rest of this already extreme winter. Summer is just around the corner.

11:00 pm ET April 10, 2021 RETWEET
The Office of the United Nations High Commissioner for Human Rights said it has asked the UAE for "proof of life"ŌĆtwitter.com/i/web/status/1ŌĆ”zY
cnni

10:01 pm ET April 10, 2021 RETWEET
Nearly 40% of US Marines are declining Covid-19 vaccinations, according to data provided to CNN by the service, theŌĆtwitter.com/i/web/status/1ŌĆ”KL
cnni