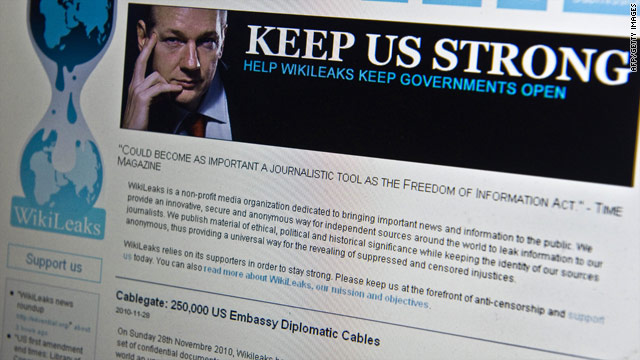 It's no secret that WikiLeaks' cable document dumps have caused ripples of concerns and speculation about how well the United States can keep secrets - its own and those of other countries.

It's been embarrassing to both U.S. diplomats and foreign leaders mentioned in the cables, but there haven't been any bombshells from the small percentage of documents released so far. The CIA, known for its ability to keep secrets, is taking no chances of being pulled further into the fray. The CIA has only been mentioned a few times in the cables, and has not been hit nearly as hard as other agencies and diplomats, but it does not appear willing to wait on the sidelines.

And it has an answer for WikiLeaks: WTF. Seriously.

In a move that couldn't be more ironic, and made for headlines such as the above, the CIA adopted a task force. And like all things involving the military, or secrecy, acronyms are huge. So when the CIA developed the WikiLeaks Task Force, naturally, it was likely thinking of the KISS method - Keep It Simple Stupid.

But in doing so, the CIA has proved it either has a really good sense of humor or was trying to send a snarky message, or perhaps someone at the agency just didn't think hard enough about the name choice.

"Officially, the panel is called the WikiLeaks Task Force," The Washington Post reports. "But at CIA headquarters, it's mainly known by its all-too-apt acronym: W.T.F."

OK, all jokes and obvious humor aside, the CIA is trying to do something real here - and that's to try and protect its reputation for secrecy.

Secretary of State Hillary Clinton and top aides had to start a new game plan - going to meet with foreign ministers, explaining, apologizing, cajoling and trying - to salvage relationshipsÂ that she and the Obama administration had worked hard to establish. The State Department went into "war room" mode, pulling together an emergency round-the-clock team to handle the fallout.

So no doubt, the CIA is looking to make sure it won't be in the same situation.

"The director asked the task force to examine whether the latest release of WikiLeaks documents might affect the agency's foreign relationships or operations," CIA spokesman George Little told The Washington Post.

That's a high priority, officials told the paper. Because having any compromised informants really could lead to a real WTF situation - and not one the CIA or any government department would want on its hands.

12:07 pm ET July 1, 2022 RETWEET
Tropical Storm Bonnie has formed in the southern Caribbean. Bonnie will continue to strengthen over the next 12 toâ€twitter.com/i/web/status/1â€¦X6
CNNweather

10:44 am ET July 1, 2022 RETWEET
â€śâ€¦. In one, Ms. Hutchinson told the panel she was told to â€śprotectâ€ť certain individuals to â€śstay in good gtwitter.com/i/web/status/1â€¦o/8rlXupbTna
susancandiotti

10:26 pm ET June 30, 2022 RETWEET
NYT: â€śraising legal and ethical questions about whether the former president may be influencing testimony with a ditwitter.com/i/web/status/1â€¦Fhsy
susancandiotti