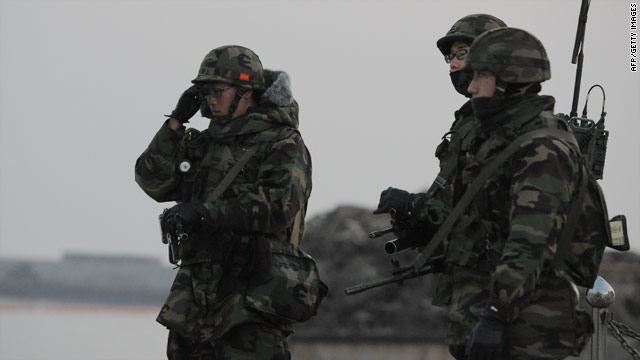 Concern on Korean peninsula - Tensions rippled across the Korean peninsula as South Korea geared up for its largest land and air winter drills Wednesday. The maneuvers, which are planned for Thursday, are being choreographed in the shadow of the South's reclusive, tough-talking communist neighbor. (Above: South Korean marines patrol on the island of Yeonpyeong near disputed waters of the Yellow Sea on Wednesday.)

The South Korean army said Wednesday that the long-planned live-fire drills will be held just 15 miles from its longtime adversary North Korea, whose nuclear aspirations strike worry in Seoul and in capitals across the world. Meanwhile, North Korea is retaliating for a November artillery attack by launching a "fax attack" on South Korea, an official said Wednesday.

And CNN's Wolf Blitzer reports on his six-day trip to North Korea: "This is a tinderbox. One miscalculation can quickly lead to all-out war and hundreds of thousands of ... casualties."

The Pentagon has an 87-page implementation plan for the repeal of "don't ask, don't tell." Over the next several weeks, military officials need to examine and rewrite a series of policies, regulations and directives related to the current law.

In fact, it will take a series of actions to make the repeal happen, and no one at the Pentagon seems to know when the policy's actual end date might be. CNN takes a look at - headlines aside - what the signing means in regards to "don't ask, don't tell" staying in place.

Rain pummeling SoCal - Half a dozen Southern California counties are under an emergency declaration Wednesday as another powerful storm from the Pacific pummels the region.

The declaration, from Gov. Arnold Schwarzenegger, warns of a forecast that calls for "extraordinary and continuing rainfall" that is likely to cause more flooding and landslides in the region, and it authorizes state assistance for local authorities.