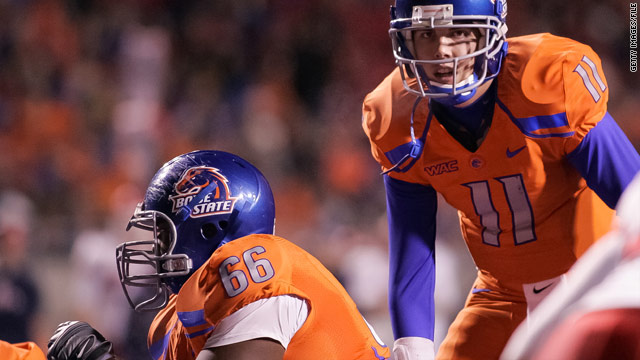 Oh, what could have been for Boise State? College football's most notorious underdog, and most debated team, came within two Kyle Brotzman chip-shots of going undefeated this season and receiving a BCS berth to the Rose Bowl.

Instead, the kicker's two field-goal attempts were painfully missed, Boise State lost to Nevada and the one-loss Broncos plummeted to where most people go when they fall on hard times: Las Vegas. But not all is lost. No. 10 Boise State attempts to salvage its BCS-busted season tonight when they take on No. 20 Utah in the MAACO Las Vegas Bowl (8 p.m. ET, ESPN). It's a chance for seniors like Titus Young and Austin Pettis to go out on a winning note, but it's also hard to ignore what Boise State is missing out on after a season that seemed like one of destiny. SI.com's Stewart Mandel previews the game and breaks down why he thinks the Broncos can bounce back and break the Utes' nine-game bowl winning streak.

In addition to the Las Vegas Bowl, here's what to watch tonight (all times Eastern):

No. 18 Texas at No. 12 Michigan State (7 p.m. ESPN2) Spartans coach Tom Izzo returns from a one-game suspension to put the school's 52-game non-conference home winning streak up on the line against the Longhorns.

Chicago Bulls at Washington Wizards (7 p.m., NBATV) The Bulls have won eight of their last nine games after a 121-76 dismantling of the 76ers on Tuesday. But the Wizards are coming off a 33-point victory and will suit up newly acquired Rashard Lewis for the first time.

No. 21 Illinois at No. 9 Missouri (9 p.m., ESPN2) The annual Braggin' Rights game pits the two border rivals against one another while ranked for the first time since 2003. Mizzou snapped a nine-game losing streak in the series last season.

3 - Games Kansas State guard and preseason Big 12 Player of the Year Jacob Pullen has been suspended for receiving impermissible gifts in relation to purchasing clothing from a local department store. Senior forward Curtis Kelly has also been suspended for the same violation.