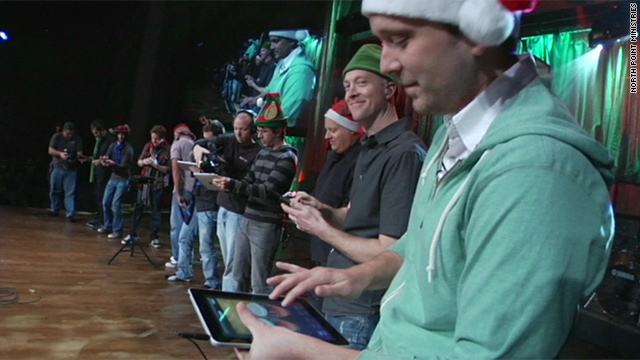 iBand Chorus – Using only iPads and iPhones, a group of musicians rocked North Point Community Church in Alpharetta, Georgia, to the sounds of the season. While banging away on keys, drums and guitars simulated by apps like NLogSynth PRO, the band, called iBand, tore the roof off the place while ringing in some holiday cheer.

Population: Me – A one horse town doesn't hold a candle to Buford, Wyoming. In Buford, you can literally meet all the residents with one handshake. Don Sammons has his own ZIP code, but he's not the victim of a cruel fat joke. Three years ago, his grown son moved away, making him the town's sole resident and only addressee. The nightlife in Buford may not be so great, but hey, Don gets to name his own streets and the city council meetings are refreshingly brief.

Home taken in flood – An Arizona couple watches in horror as their house and their memories are washed away on camera by a flood-swollen river. The neighbors come together to embrace the couple, showing that the worst of Mother Nature is no match for the best of human spirit.

Driver talks about crash – "It all happened so fast" is a glorious understatement for an IndyCar driver after a crash. Mike Conway describes the incredible collision that took him out of the race and left his car in shreds.

Despite record numbers of Covid-19 cases and deaths in Russia, lawmakers continue to reject the introduction of a c‚Ätwitter.com/i/web/status/1‚Ä¶Hf
cnni