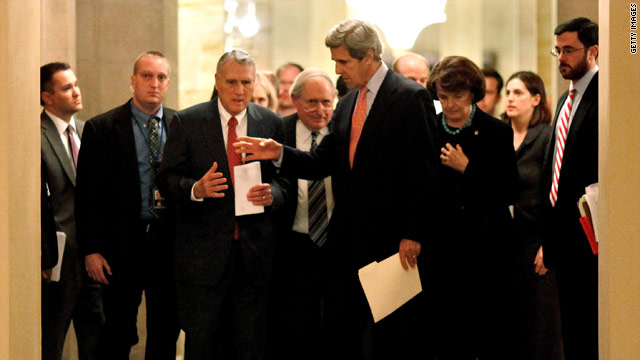 Not such a lame-duck session: What Congress passed, Obama signed in week

So about that lame-duck Congress.

After midterm elections, predictions abounded that the next few months were going to be brutal in the halls of Congress - with fighting between the GOP and Democrats, fillibusters aplenty and all around disagreement, meaning nothing was going to get done - despite a massive agenda for the Obama administration.

But now, shortly before the holidays, in what many might have said in November would only happen if there were a Christmas miracle, key pieces of legislation have been signed into law, practically back-to-back. Some, such as the DREAM Act, failed a procedural vote in the Senate. The bill would have offered a path to citizenship to some illegal immigrants who entered the U.S. as children. President Barack Obama called the defeat his "biggest disappointment."

Still, with everything happening so fast, it was blink, and you missed if legislation passed or failed.

So, we figured we'd help you catch up, take a look at where things stand and perhaps re-dub the group of lawmakers many thought couldn't even sit in the same room together as the not so lame-duck Congress after all.

The compromise worked out by Obama and Senate Republican leaders extended Bush-era tax cuts to everyone for two more years while also extending unemployment benefits for 13 months and reducing the payroll tax by 2 percentage points for a year, all intended to bolster the slow recovery from economic recession. Here's what's in the bill and what it means for you.

The unemployed will get a 13-month extension of the deadline to file for additional unemployment benefits - which go as high as 99 weeks in states hit hardest by job losses.

The benefits were part of the brokered tax deal but don't affect everyone: Residents in at least five states won't have access to the same level of unemployment benefits as their peers nationwide because the unemployment rates there are improving. So, according to federal law, the jobless there can't receive checks for as long as those in harder-hit states.

Food safety - Passed by Congress on Tuesday, sent to Obama to sign

A major food safety bill that passed the House of Representatives and Senate earlier this year before stalling because of a procedural problem won final approval Tuesday and now goes to Obama to be signed into law.

The bill, designed to increase government inspections of the food supply in the wake of recent deadly foodborne disease outbreaks, originally passed with wide support in both chambers after originating in the Senate. However, it needed approval again because it violated a constitutional requirement that bills raising revenue be initiated in the House. The Senate passed its version of the Food Safety Modernization Act on Sunday, and the House voted 215-144 for final approval.

Obama signed a bill repealing the "don't ask, don't tell" policy that bans openly gay and lesbian soldiers from the military. Obama promised to repeal the ban during the 2008 presidential election.

However, it will take a series of actions to make the policy end, and no one at the Pentagon seems to know when that actual date might be. Over the next several weeks, military officials need to examine and rewrite a series of policies, regulations and directives related to the current law.

Obama signed a bill that will maintain most funding levels for the federal government for another 10 weeks, White House press secretary Robert Gibbs said.

Both chambers of Congress agreed on a resolution authorizing government funding through March 4. The previous law funding the government - a so-called continuing resolution - expired at midnight Tuesday.

9/11 responders health bill - Passed by Congress on Wednesday, sent to Obama to sign

A compromise bill to provide free medical treatment and compensation to first responders of the September 11, 2001, attack won final approval Wednesday from the House and Senate.

The bill has been sent to Obama to be signed into law. And it is one some first responders said they never expected to see enacted - one responder called the passage "bittersweet" and better than any other Christmas gift.

New START - Approved by Congress on Wednesday, sent to Obama to sign

The Senate voted Wednesday to approve the new nuclear arms control treaty with Russia. The New Strategic Arms Reduction Treaty, or New START, was cleared with the help of solid Democratic support as well as the backing of several Republican senators.

The treaty would resume inspections of each country's nuclear arsenal while limiting both the United States and Russia to 1,550 warheads and 700 launchers. It still needs the Russian parliament's approval. Obama signed the treaty with Russian President Dmitry Medvedev in April.

"Yes, I wept. I wept at the complete lack of care for the human beings that are impacted by these decisions, I weptâ€twitter.com/i/web/status/1â€¦fS
cnni