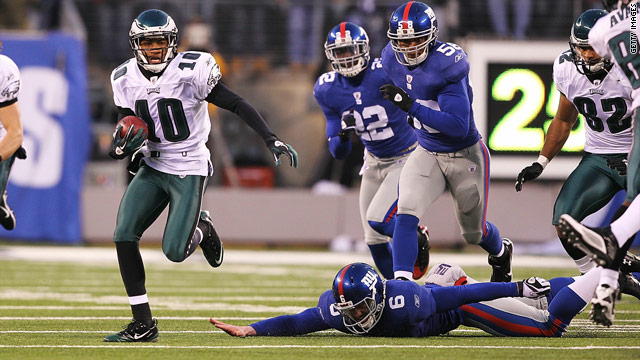 When you think of the Boston Red Sox, do you think of recent World Series victories? Or do you think of painful losses and a wobbly grounder splitting Bill Buckner's legs at first base? And when you think of major collapses, do you get flashbacks to Greg Norman at Augusta or Jean Van de Velde rolling up his pants and wading in the Barry Burn at Carnoustie?

Our strongest sports memories aren't always our fondest, but the harsh reality is sports can often be as cruel as they are rewarding. For every winner, there is a loser. And for every priceless moment of utter bliss, there is usually a devastating feeling of emptiness right around the corner.

As sports fans, we live for the highs and deal with the lows. That's part of the deal. Look no further than what some are calling the "Miracle at the New Meadowlands" last week. On one side, you have the sense of elation Philadelphia Eagles fans felt when they watched DeSean Jackson (pictured above) return a game-winning punt 65 yards for a touchdown as time expired.

On the other side, try to imagine the devastation New York Giants fans felt when they saw their rookie punter Matt Dodge boot a line drive toward the most dangerous player in all of football, only to watch him then take it to the house in humiliating fashion for the win.

Moments like that stick with sports fans, for better or for worse.

This is why SI.com's Joe Posnanski took to assembling a list of the 32 most agonizing defeats in the history of sports. Posnanski chronicles the collapses and catastrophes that have been the most painful for him to watch, but you don't have to agree with every one of his selections. In fact, he admits up front the list is extremely subjective.

But the list nevertheless takes you back through the years and provides a history lesson - albeit a painful one - of the lowest of lows throughout sports history. Warning:Â  The top five are particularly difficult to stomach.

Here's what to watchÂ Friday night:

A shootout is expected between two high-octane offenses in the Hawaii Bowl. SI.com's Bill Trocchi previews the action.

23 - Straight games Pittsburgh Penguins forward Sidney Crosby has recorded a point, the longest such streak since 1993, when Quebec's Mats Sundin put together a 30-game run. Wayne Gretzky holds the record at 51.

228 - Rushing yards for San Diego State running back Ronnie Hillman in the Aztecs' 35-14 win over Navy in the Poinsettia Bowl on Thursday. The output marked a career high for Hillman and a Poinsettia Bowl record. (The previous was 129.)

10 - Consecutive games won by the San Antonio Spurs before falling 123-101 to the new-look Orlando Magic. The Spurs still own the NBA's best record at 25-4.