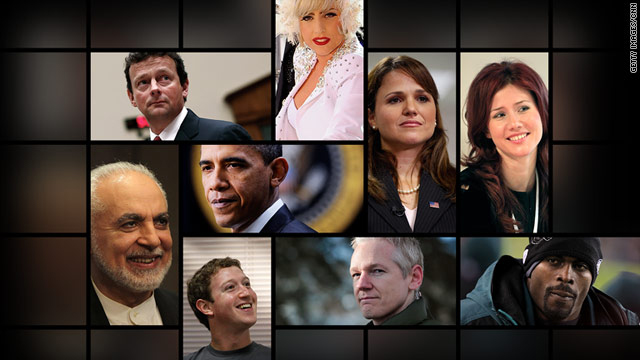 Who is 2010's most intriguing person?

Every weekday, CNN takes a closer look at the news and the chatter dominating the global conversation to find the most intriguing people.

Whether it's because they've done something good or something bad, something unexpected or something that we just can't stop talking about, we need to know more about these people.

Sometimes, people make the list for things they've said (again, good or bad), and sometimes it's for a video that's surfaced from someone's past. Perhaps there's a story line that's as gripping as a blink-and-you-miss-it movie scene.

They're the people behind the stories that have you Googling endlessly to learn more. Who are they? Where did they come from? And why the heck is everyone around me asking if I know them?

They can be celebrities, politicians, innovators, company CEOs or sports superstars. And sometimes they may not be people you know well - but we think something they're doing just has to be highlighted. Whether or not they've been thrust into the limelight as part of a story (willingly sometimes, other times not), there were many occasions the most intriguing people were ones we hadn't even heard of before that day.

We narrowed it down to 20, and now we need your help to decide the top 10 most intriguing people of 2010.

Who do you think was the most intriguing of 2010? We've created an interactive so you can rank your top 10 by dragging the images on the right to the appropriate slots on the left. You've got until midnight ET Tuesday, December 28, to vote on CNN.com and share your list with others.

Then, you can tune in Thursday, December 30, to CNN. We'll be unveiling the top 10 list throughout the day. Stay tuned and check the site to see how your list compares.

A disaster has been declared in an Alaskan village after an ice jam caused severe flooding and forced residents toŌĆtwitter.com/i/web/status/1ŌĆ”Zj
CNNweather

10:59 am ET May 18, 2021 RETWEET
Heavy rain is leading to flash flooding, impacting areas from southeast Oklahoma to the Mississippi Gulf Coast. CNNŌĆtwitter.com/i/web/status/1ŌĆ”Lq
CNNweather

9:48 am ET May 18, 2021 RETWEET
Torrential rain fell across portions of southeastern Texas and southwestern Louisiana on Monday, leading to dangeroŌĆtwitter.com/i/web/status/1ŌĆ”0M
CNNweather

8:16 am ET May 18, 2021 RETWEET
India was slammed on Monday by the strongest storm on record to reach its west coast, hampering authorities' responŌĆtwitter.com/i/web/status/1ŌĆ”Ap
CNNweather