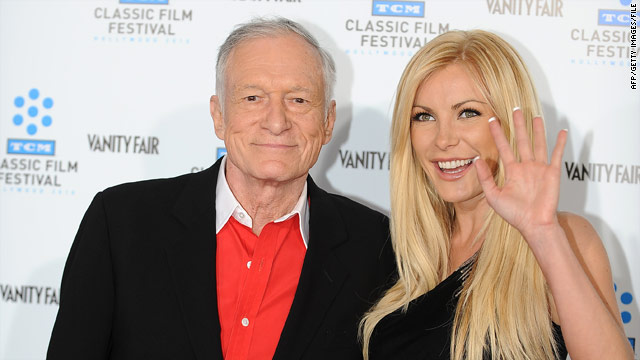 “When I gave Crystal the ring, she burst into tears,” Hefner posted on his Twitter account. "This is the happiest Christmas weekend in memory."

“Yes, the ring I gave Crystal is an engagement ring," he clarified later for those asking if it was merely a Christmas present or a step forward for the couple.

Hefner's love life has, of course, been well documented - including the popular reality show showcasing a trio of girlfriends in "The Girls Next Door."

Hefner and his previous wife, 1988 playmate of the year Kimberley Conrad, were married in 1989 and separated in 1998. They divorced this year. Now Hefner will walk down the aisle half a century after his first marriage in 1959 to Mildred Williams.

But if you think Hef might not be the exact icon of monogamy or a perfect relationship, he begs to differ. In an interview with RadarOnline.com after the breakup of Sandra Bullock and Jesse James, he said more than anyone, he knows all of the sides to a relationship - and what makes one work.

"I was married and completely faithful for eight years," he told Radar. "I lived a single life, a playboy lifestyle, before and after it, but while I was married I was faithful to it."  Hefner told the New York Times magazine in July that he uses Viagra - which he called "God's little helper" - a couple of times a week.