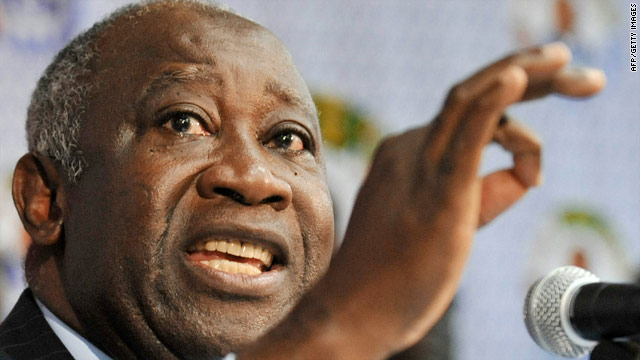 The president of Ivory Coast is refusing to give up the office despite a ruling by his own country's Independent Electoral Commission that he lost his bid for re-election November 28.

The international community, including the United States, the United Nations and the African Union, has recognized challenger Alassane Ouattara as the winner and urged Gbagbo, pictured above, to cede power.

Ouattara has started making appointments to the Cabinet and to diplomatic positions, but Gbagbo has threatened to expel the ambassadors of countries that recognize them.

Gbagbo said last week he would expel U.N. peacekeepers, but U.N. Secretary-General Ban Ki-moon said the troops would stay, and they have.

The presidents of three neighboring countries met Tuesday with each candidate, but no details emerged. They said Wednesday they would return Monday to continue working on the crisis.

Gbagbo was first elected in October 2000, after Ouattara was banned from running for the office. Ouattara, a former prime minister, refused to recognize Gbagbo's government.

A failed 2002 coup attempt led to a civil war that left the country divided into the south, ruled by the government, and the north, controlled by rebels, until a 2007 accord resolved the conflict.

The Polk County, Florida, sheriff recently got rid of the county jail's basketball hoops and donated them to eight churches.

"This is a county jail; it is not a gymnasium," Judd told the Tampa Tribune. "It's not some place where inmates can show up to have pickup games of basketball with their thug friends."

The inmates can jog or perform other exercise that requires no equipment, Judd said. State law only requires jails provide opportunity to work out.

"I think people should come to jail for an experience â€” and that experience should be 'I don't want to come back,'" Judd told the South Florida Sun-Sentinel's "Flori-DUH" blog.

Who knows how those inmates feel about not getting their b-ball, but Judd's position has certainly peeved one group - Atheists of Florida, who wrote him a letter contending that he should stop donating county equipment to churches.

Judd has been a controversial figure in Florida for a long time. A Tampa Tribune editorial last week accused him of seeking the spotlight too much and mocked him as "the High Sheriff of Narcissusham."

Maybe those car insurance commercials weren't so far off. Prehistoric man wasn't as crude as you may have been led to believe, according to new research.

A new study shows Neanderthal man - the immediate predecessor to modern humans - ate more than just meat and was sophisticated and intelligent enough to cook.

Researchers at George Washington University and the Smithsonian Institution found starch granules from plant grains in Neanderthal specimens' teeth, indicating they ate plants. The find appears to debunk the theory that Neanderthals became extinct because of dietary deficiencies.

The researchers did not indicate whether the Neanderthals ever went bowling or hung out at parties.

A 36-year-old Asian elephant, who has spent much of his life languishing alone in captivity, is on his way to a sanâ€twitter.com/i/web/status/1â€¦Tq
cnni