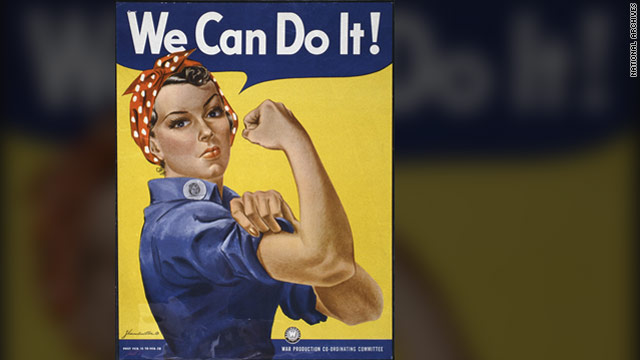 Geraldine Hoff Doyle, 'We Can Do It!' poster inspiration, dies at 86

The woman who inspired the famous World War II "We Can Do It!" poster has died.

Geraldine Hoff Doyle was just 17 when a United Press photographer captured her in 1942 working at a Michigan metal factory, wearing a red polka-dotted bandanna.

Her pretty face caught the eye of artist J. Howard Miller, who had been commissioned by the government to create a series of motivational posters for factory workers.

The face on the poster was Doyle's, but the powerful muscles were not, her daughter Stephanie Gregg of Eaton Rapids, Michigan, told The New York Times.

"She didn't have big, muscular arms," Gregg said in the Times' obituary. "She was 5-foot-10 and very slender. She was a glamour girl. The arched eyebrows, the beautiful lips, the shape of the face â€” that's her."

Doyle abandoned the factory job after just two weeks, worried that she might injure her hands and not be able to play cello anymore, according to the Washington Post. She took a job at a soda fountain, where she met her future husband.

The poster eventually became an icon of women's empowerment, but Doyle never recognized her own face on it until 1984, when she saw it in Modern Maturity magazine, the Lansing (Michigan) State Journal reported.

Doyle was married for 66 years to dentist Leo Doyle, who died in February. They had six children, 18 grandchildren and 25 great-grandchildren. Geraldine Doyle died Sunday at a hospice facility in Lansing, her daughter said. She was 86.

9:31 am ET May 18, 2022 RETWEET
Pollution caused one in six deaths worldwide in 2019, a new study has revealed â€“ more than the annual global tollstwitter.com/i/web/status/1â€¦9aRi
CNNweather

3:00 pm ET May 18, 2022 RETWEET
"It was designed for [Marilyn Monroe]. Nobody else should be seen in that dress," said the designer who sketched thâ€twitter.com/i/web/status/1â€¦XF
cnni

2:30 pm ET May 18, 2022 RETWEET
The new series stars Tatiana Maslany as She-Hulk/Jennifer Walters, a lawyer who specializes in superhuman-orientedâ€twitter.com/i/web/status/1â€¦ub
cnni

Secretary of State Antony Blinken says the US has reopened its embassy in Kyiv after it closed three months ago aheâ€twitter.com/i/web/status/1â€¦TM
cnnbrk