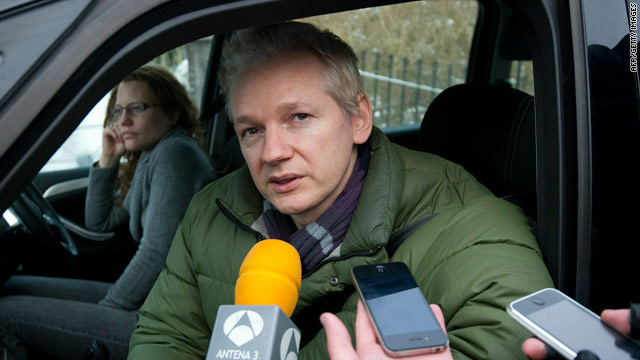 He's been called a criminal, a spy and a champion of the First Amendment. Some think he’s a villain. Some see him as a hero.

The only thing that’s beyond debate: Julian Assange has more intrigue than the pulp section of a bookstore.

WikiLeaks' mastermind, the guy who everyone loved to hate or loved to defend, got the most first-place votes (25%) on CNN.com's “Most Intriguing Person” poll for 2010. Following Assange were:

Maybe Assange’s victory is payback for Zuckerberg edging him out of Time's Person of the Year?

Let's recap why Assange was so captivating in ’10.

In July, the 39-year-old Australian with snow-white hair dominated headlines when the online organization he founded four years ago published a huge trove - 90,000 documents - of secret military documents about the Afghanistan war. Simultaneously, major news outlets The Guardian, The New York Times and Der Spiegel published the classified records and provided series of stories layered with context about the biggest intelligence leak in U.S. history. The documents provided what is considered to be the first on-the-ground, unvarnished look at the Afghanistan war. Many said that the documents conveyed that the war was going much worse than the positive interpretation often heard in Washington.

Suddenly, Assange was everywhere, and so were questions. Who was this man, and how did he get this information? What is WikiLeaks?

Assange taunted his critics (mostly government officials) on Twitter and in interviews and defended the right to publish the information, arguing that the world should know. An American soldier, Pvt. Bradley Manning, sat in a military prison in Virginia, widely suspected of the leak. Manning seems to have garnered fewer headlines than Assange, though the soldier’s story and the characters involved have sparked passionate reaction. Assange has repeatedly said that he does not know whether Manning was indeed the source of secret documents.

And that was just this summer.

By the fall, Assange was uber-famous. He was elusive, telling journalists that he hopped around the globe trying to avoid the officials whose ire he'd mightily stoked by betraying their secrets. During an interview with CNN on the eve of another document dump - this time more than 400,000 classified documents about the Iraq war - Assange walked out. He was irate that a reporter would ask him about allegations that he'd committed a sex crime in Sweden.

That separate story concerning the Sweden case unfolded in intriguing ways and is still unspooling. It's playing out now, as is another massive development in the ongoing WikiLeaks saga.

Popularly known as CableGate, WikiLeaks has released what it says is the beginning of a collection of 250,000 diplomatic U.S. cables. Some cables seem to be merely titillating; others appear to be critically revealing. No matter what, the story is going to continue for a long while. Consider this: Less than 1 percent of that gigantic trove has been published so far.

In the wake of the cable releases, corporations and groups doing business with WikiLeaks stopped doing business with the group, and in response Anonymous avengers fought back. Meanwhile, Assange was arrested in relation to the Sweden case, chatter about a "poison pill" file that Assange established captured the public's imagination, and the debate over WikiLeaks raged on.

Bottom line: You know you're interesting when “Saturday Night Live” creates a recurring character based on you. And isn't it a clue that you're going to win Most Intriguing Person on CNN.com when even your alleged years-old online love pursuits become a top headline? Read his old OKCupid profile.

There's undoubtedly more to come from Assange. He told Forbes magazine in a recent interview that he has insider documents from a major bank, revealing all kinds of corruption and misdeeds. Many have speculated that it's Bank of America.

The holidays proved no break in Assange coverage. News hit that he inked a book deal. He said the money would go to pay his legal fees.

The biggest question, the one that perhaps fascinates the most, is this: Will Assange be charged with espionage?