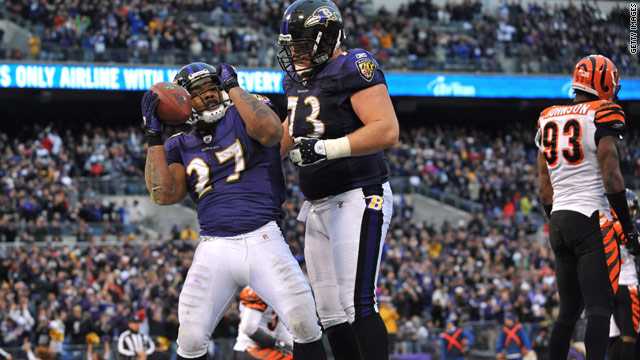 The NFL’s regular season ended with a 16-game Sunday in which more than a dozen teams were still vying for a shot at the playoffs. So in all the gridiron madness, who came out on top? If you ask SI.com’s Don Banks it may have well been the Baltimore Ravens who secured their spot in the playoffs in a 13-7 victory against the Bengals.

But the rout was far from the most impressive thing to happen to the Ravens this weekend. The Raiders’ 31-10 win over the Chiefs in Kansas City, knocked the team from No. 3 to No. 4 in the AFC playoffs, allowing the Ravens to open their postseason at Kansas City. By dodging a major bullet, in the form of Colts’ QB Peyton Manning, the Ravens have significantly upped their chances to advance in the playoffs.

“Baltimore won't have to match wits once again with Manning, and that's a break for the Ravens, who have consistently shown signs of having No. 18 lodged in their heads,” Banks writes. “Why deal with your No. 1 nemesis if you don't have to?”

But despite the help they’ve received from the Raiders’ victory, the Ravens will still have to battle against a struggling defense and injuries that have sidelined cornerback Josh Wilson, offensive left tackle Michael Oher and safety Ed Reed.

We take a break from NFL action to check in as college football bowl season chugs along with the Hokies battling the Cardinals:

Virginia Tech vs. Stanford (8:30 p.m., ET, ESPN) - While Virginia Tech won’t go down without a fight, look for the Hokies to struggle against QB and potential first-round draft pick Andrew Luck and the Cardinals.

22 – Losing streak the Philadelphia Flyers broke with their victory in Detroit against the Red Wings Sunday night. The Phillies won 3-2 over Detroit.

2013 – Year that San Francisco will host the America’s Cup regatta after beating out Newport, R.I. for the honor.

28 – Number of points Nolan Smith scored in Duke’s 74-63 win over Miami during the team’s ACC opener.