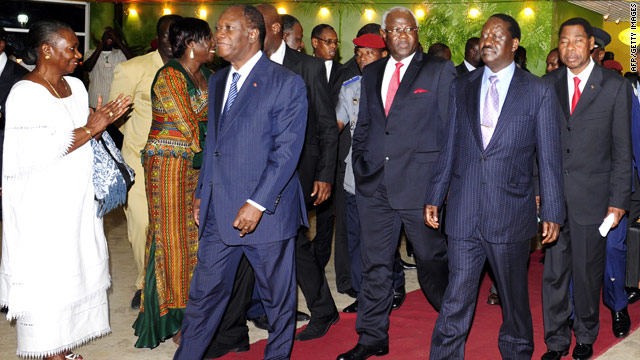 Alassane Ouattara, left, who has been declared the winner of the presidential election, meets with African leaders.
January 4th, 2011
10:36 AM ET

Talks between Ivory Coast's political rivals and African mediators failed to break a political impasse although the Kenyan leader acting as a special envoy said Tuesday that he remains optimistic that bloodshed can still be avoided.

Alassane Ouattara, the president-elect, will not meet face-to-face with Laurent Gbagbo, the defiant self-declared president, until Gbagbo acknowledges electoral defeat.

"Ouattara has always been clear on this issue since the beginning. He can only meet with Gbagbo once he recognizes him as president," said Patrick Achi, Ouattara's spokesman.

However, Kenyan Prime Minister Raila Odinga, the envoy for the African Union, urged patience in resolving the crisis through negotiations.