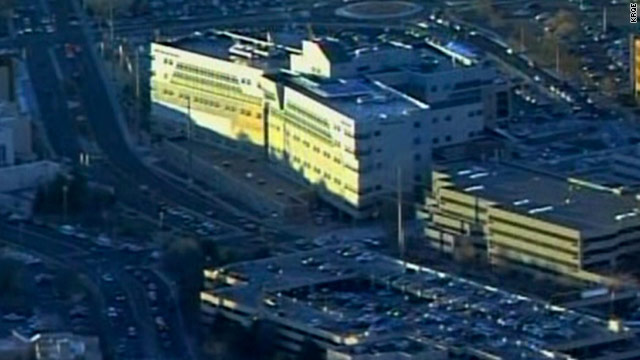 Someone shot a gun Tuesday at the University of New Mexico Hospital, but no one was injured, a spokeswoman said.
January 4th, 2011
06:32 PM ET

[Updated at 8 p.m. ET] A suspect fired his gun inside the University of New Mexico Hospital in Albuquerque Tuesday, but no one was injured, the university and police said.

Witnesses told officers that a female patient was with her child when the woman's boyfriend entered the room, police said. The couple began to argue.

At some point during the altercation, the suspect pulled out a small handgun and purposefully fired it, according to a statement from the Albuquerque Police Department.

He then fled. Video shows the man leaving the hospital about an hour later, said police, adding that the search for the suspect continues.

"They confirm one person was in the hospital and shot his gun inside the hallway, but no one was injured," said Cindy Foster, a spokeswoman for the UNM Health Sciences Center.

The university lifted a lockdown order it had previously issued for all personnel in the central and northern portions of the campus.