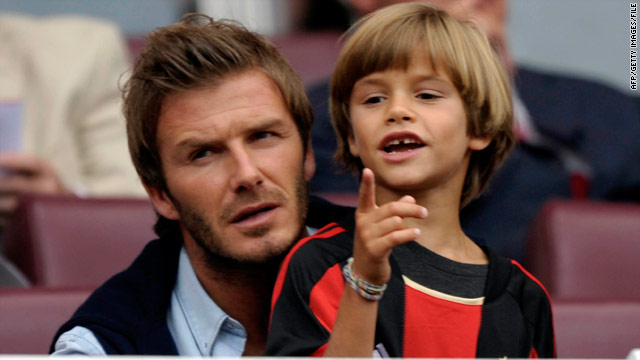 The 8-year-old son of soccer superstar David Beckham and former Spice Girl (Posh) Victoria Beckham is one of Britain’s most stylish men, according GQ magazine in the UK.

The youngster came in No. 26 in GQ’s annual ranking of Britain’s 50 most stylish men. That puts Romeo one spot in front of the recently engaged Prince William but 10 spots behind his L.A. Galaxy midfielder father.

GQ calls the Beckhams' middle child “a frighteningly tuned-in (and well-connected) eight-year-old.” Not shocking for a boy who last year signed a deal to design his own line of sunglasses.

Top on the list is “Kick-Ass” and “Nowhere Boy” actor Aaron Johnson.

Other notables include Prince Harry at No. 5, British Prime Minister David Cameron at No. 20, singer Elton John at No. 21 and actor Daniel Day-Lewis at No. 50.

Talk about being thrown into the lion’s den – except that Jablon is sleeping there of his own accord.

The Spring Hill, Florida, wildlife expert is holing up with Lea and Ed, two adult lions who reside at his Wildlife Rehabilitation of Hernando County. He will live with the lions all month to raise money for the facility, which takes about $75,000 a year to operate.

The 14-acre facility is home to several animals, including monkeys, alligators, coyotes and eagles. CNN affiliate WTSP-TV in Tampa reported. Jablon said he’d like to make between $100,000 and $200,000, every penny of which he says will go the animals at his center.

The cohabitation was scheduled to be streamed live on the internet, but the site was not loading Tuesday morning. However, the center’s Facebook site was still up and running for those with inquiries or donations.

“I’m a nut. I don’t know, and I pick a month with 31 days, my daughter keeps reminding me,” Jablon told CNN affiliate WFTS-TV in Tampa.

Though the lions recognize him as their caretaker (check out photos of Jablon snuggling and wrestling with the big cats), he is not naive. They’re still wild animals, he said, and he has set up a lock-out area if the lions’ play time gets too raucous.

He also plans on eating when the lions eat - once a day in the evening - and he’ll be leaving the cage only to use the portable toilet just outside the confines.

The Supreme Court justice, who has been on the bench for 24 years, is catching some heat after remarks he made during an interview with California Lawyer magazine about whether the Constitution protects women and gays from discrimination.

The interview has sparked outrage on Twitter and in mainstream media. Among those who took issue were Marcia Greenberger, founder of the National Women's Law Center, who called the justice's remarks "shocking."

Blogger Perez Hilton, known for quickly coming to the defense of gay rights, titled a post "WTF Scalia" and said, "We find it really troubling that all of this is coming from a current Supreme Court justice. He's retiring soon, right?"

The blog Gawker, too, had its own take: "Surprise, surprise! There is no line in the Constitution that reads, "ATTN: ANTONIN SCALIA JUST SO YOU KNOW WOMEN ARE AFFORDED THE SAME CONSTITUTIONAL PROTECTIONS AS EVERYONE ELSE FYI ... "

Here's the exchange exactly as it went down:

Interviewer: In 1868, when the 39th Congress was debating and ultimately proposing the 14th Amendment, I don't think anybody would have thought that equal protection applied to sex discrimination, or certainly not to sexual orientation. So does that mean that we've gone off in error by applying the 14th Amendment to both?

Scalia: Yes, yes. Sorry, to tell you that. ... But, you know, if indeed the current society has come to different views, that's fine. You do not need the Constitution to reflect the wishes of the current society. Certainly the Constitution does not require discrimination on the basis of sex. The only issue is whether it prohibits it. It doesn't. Nobody ever thought that that's what it meant. Nobody ever voted for that. If the current society wants to outlaw discrimination by sex, hey we have things called legislatures, and they enact things called laws. You don't need a constitution to keep things up-to-date. All you need is a legislature and a ballot box. You don't like the death penalty anymore, that's fine. You want a right to abortion? There's nothing in the Constitution about that. But that doesn't mean you cannot prohibit it. Persuade your fellow citizens it's a good idea and pass a law. That's what democracy is all about. It's not about nine superannuated judges who have been there too long, imposing these demands on society.