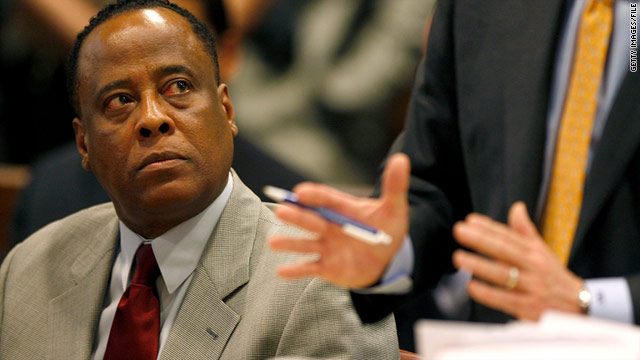 Conrad Murray attends hearing to determine if there is enough evidence for him to stand trial for Michael Jackson's death.
January 4th, 2011
07:33 PM ET

Dr. Conrad Murray seemed not to know how to administer cardiopulmonary resuscitation as he waited for paramedics to arrive at Michael Jackson's house, a witness at Murray's preliminary hearing testified Tuesday.

Former Jackson security chief Faheem Muhammed said he and and guard Alberto Alvarez saw Murray crouched next to Jackson's bed "in a panicked state asking, 'Does anyone know CPR?'"

"I looked at Alberto because we knew Dr. Murray was a heart surgeon, so we were shocked," Muhammed said.

When defense lawyer Ed Chernoff asked if perhaps Murray was only asking for help because he was tired, Muhammed said "The way that he asked it is as if he didn't know CPR."

2:33 am ET May 29, 2020 RETWEET
As the American death count from coronavirus ticks above 100,000, the panel assembled by US President Trump to confâ€twitter.com/i/web/status/1â€¦ua
cnni

2:31 am ET May 29, 2020 RETWEET
Danielle Gletow and her organization, One Simple Wish, are making sure children in foster care â€” and those who havetwitter.com/i/web/status/1â€¦7f6M
cnni